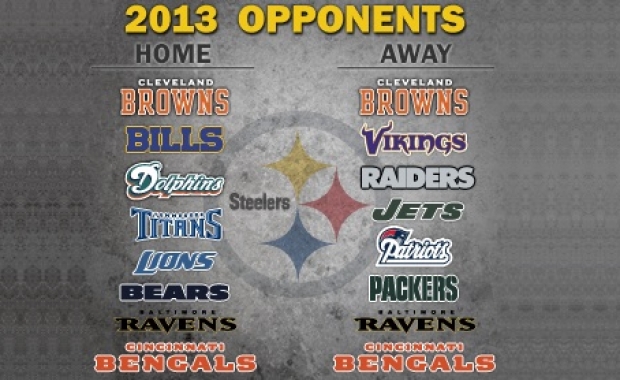 Back in 2008, the Pittsburgh Steelers faced the toughest schedule in NFL history. Fans hoped they’d be able to keep their heads above water long enough to get into the playoffs. Instead, they successfully ran the gauntlet, finishing the season 12-4 and winning their sixth Super Bowl title. When reflecting back on 2008, the never-ending slate of tough competition actually helped the team adjust to playing at a high level on a weekly basis, or, as Mike Tomlin put it in one of his less silly catchphrases, “Steel sharpened steel.”

Maybe lightning will strike twice in 2013.

The NFL released their official schedule last night and to say the schedule makers did the Black and Gold no favors is quite the understatement. I’m not going to look at the opponents and make any judgements on the team’s prospects. Trying to predict the outcome of games six months away from being played is sheer idiocy. Besides, any Steeler fan looking at the schedule and thinking, “Pffftt, we got x wins in the bag” didn’t pay attention last season.

What I mean when I say the schedule is brutal is the way it’s constructed. Four prime time night games are par for the course when you’re the most popular franchise in the NFL. However, scheduling the Super Bowl champion (barf) Baltimore Ravens on Thanksgiving Night is not. The Steelers have done terrible on Thursdays against lesser competition, playing a key division game on five days rest late in the season is a recipe for disaster.

Their bye week comes in week five. Not the worst but still earlier than you’d prefer for a team traditionally plagued by injuries. The biggest positive is the bye comes the week after the Steelers travel all the way to London to play Minnesota. Still, the team will certainly be racking up the frequent flier miles.

Then we have the second to last game of the year. A marquee match-up with the Green Bay Packers. On paper, it sounds pretty sweet. In reality, it’s a late December road game on the frozen tundra of Lambeau Field. Talk about finding coal in your stocking.