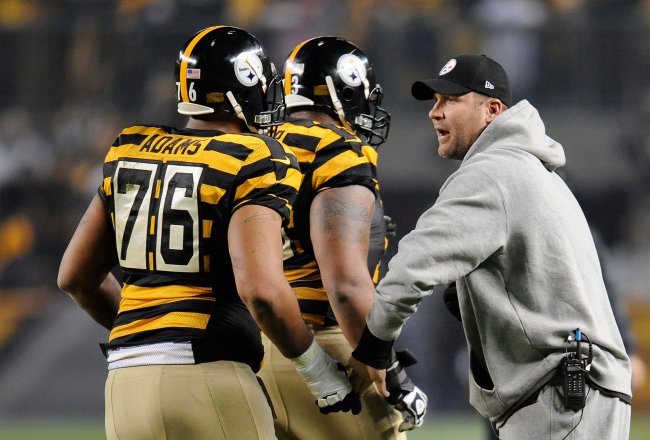 Must have been a really nice truck…

Pittsburgh Steelers offensive tackle Mike Adams was stabbed early Saturday morning in what is the latest (and certainly most bizarre) setback to befall the team’s cursed offensive line. Every year the team holds great hope for their “new look” line and every year that unit plays maybe two snaps before the Football Gods strike them down one by one. With Willie Colon gone to plague the Jets with his devastating array of false starts, I guess they needed someone new to pick on.

After questioning the Steelers drafting a guy with huge character red flags in college, I don’t want to join the conspiracy theorists who are already having a field day with this situation. I do have to admit some aspects of Adams’ story are a bit strange. First, he dropped his keys with the valet at Nakama Steakhouse on Friday night and disappeared until the service shut down at midnight. Then, Adams returned to his truck (without the keys, mind you) at around 3 a.m. when, according to his account, three men approached him. Despite one having a knife and another armed with a gun, Adams argued with the men until ultimately being stabbed.

Where did Adams go for four or five hours? If he was so concerned about his truck, wouldn’t he have picked his keys up before the valet went off duty? Speaking of which, what was he going to do with this truck if he didn’t have the keys? Maybe I missed something in the story but there is definitely a strange aspect to it. Well, the police evidently recovered a cell phone one of the thugs dropped while fleeing the scene so whatever was going on, let’s hope they get to the bottom of it.

When the story broke, Steeler Nation reacted with the predictable doom and gloom. While being stabbed in the gut is no minor thing, it does appear that Adams escaped without serious injury. The gut stick would seem to be the more serious of the blows (he was also stabbed in the left forearm). Although no major organs were damaged, the injury will probably keep him sidelined until the preseason. Ordinarily this wouldn’t be a big deal but with Max Starks out of the picture, I’m sure they wanted to take a good look at both Adams and Marcus Gilbert on the left side. In my last update, I mentioned the loss of Mad Max might come back to bite the Black and Gold sooner or later. Never did I expect “sooner” to arrive in such a bizarre fashion.