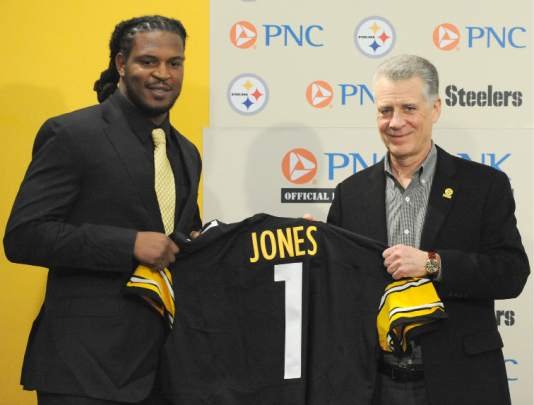 With the Pirates struggling and the Penguins in a full-blown meltdown, Pittsburgh sports fans could use any bit of good news right about now. Rejoice, fellow yinzers, for I bring tidings of great joy. The thug who stabbed Mike Adams down in the South Side has been caught and thrown in the clink.

Also, the Pittsburgh Steelers came to terms with first round draft pick Jarvis Jones. Jones signed a four year contract valued at $8.5 million, a little more than half ($4.7 million) of which comes in the form of a signing bonus. There is also a fifth year club option at an undisclosed amount. Not that eight million clams is chump change or anything but isn’t it crazy to remember four or five years ago when a guy taken in Jones’ position would sign for twice that? The owners actually did something right for a change.

In addition to inking Jones, the Steelers also came to terms on four year deals with RB Le’Veon Bell and DE Nick Williams. Why this flurry of signings? Because the Steelers are suddenly flush with cash now that Willie Colon has come off the books. Colon was designated a post-June 1st cut meaning as of Saturday, his cap hit went from $6.5 million to a little over $1 million. Of course, the team is going to have something like $4 million in dead money next year due to the sheer insanity of giving him that contract in the first place but by then some of the other recent veteran cuts should be off the books.

Make no mistake, the Steelers are reloading with young guys. As such, it’s good that they’ve now signed eight of their nine 2013 NFL Draft picks. Only QB Landry Jones remains unsigned. If he knows what’s good for him, he’ll tell his agent to get a deal done ASAP since his future career prospects depend on him getting on the field. There’s still plenty of time to learn the playbook but every day that goes by the potential of him supplanting Bruce Gradkowski as number two diminishes a little more.

For the other draftees, their chances of making a significant contribution during the upcoming season will be better than any in recent memory. Safety Shamarko Thomas was smartly the first pick to sign and with the team almost barren at the position behind the injury-prone starters, he could see significant playing time. With a lack of depth and talent at their positions, guys like Bell and WR Markus Wheaton will also have a prime opportunity to contribute as rookies. Even Jones is expected to be used in place of starting outside linebacker Jason Worilds in obvious pass rush situations, a big departure from the days when rookies where never expected to take a year to learn the ins and outs of Dick LeBeau‘s complex defense.

Here’s hoping the youngsters are up to the task.