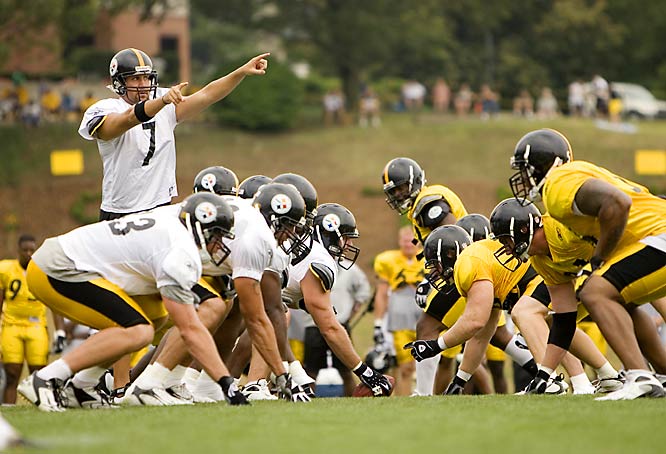 The Pittsburgh Steelers kick off their preseason against the New York Giants tonight. For those of you outside of the Steel City who are just dying to see undrafted free agents pretend to be pro ball players for a couple halves before embarking on a career selling used cars, the game will be airing on NFL Network. The red hot Pirates are in Colorado so when every player of consequence comes out by about 8:30, I’ll probably be switching the channel along with every other bandwagon jumping yinzer.

Unlike recent preseasons, the Steelers have several legit battles for starting spots going on this year. They released an “unofficial depth chart” on Wednesday which gives some indication of what they’ll be looking at tonight.

Mike Adams is listed as the starting left tackle. He’s been practicing there all week so that’s no surprise. I list it as a battle, though, since Marcus Gilbert played LT during the off-season and into the first couple weeks of camp. Adams is the favorite but if he should falter, Gilbert would be Plan B. In the meantime, Gilbert has his hands full just keeping himself in the starting line-up as word out of camp is Gilbert has played so poorly that second year man Kelvin Beachum is seriously pushing him at RT. Tonight we’ll get a chance to see first hand if Adams can truly handle protecting the blind side and if Gilbert has really fallen that far off the radar.

On the rookie front, Jarvis Jones is currently listed behind Jason Worilds at OLB while Le’Veon Bell is third on the depth chart behind veterans Isaac Redman and Jonathan Dwyer. Unless Worilds falls flat on his face, I don’t see the Steelers starting a rookie on defense. The game will be a good indicator of how far Jones has to go before he’s up to speed with Dick LeBeau‘s complicated defense. Worilds has made very little impact in his time as a starter so the sooner Jones gets up to speed, the sooner he’ll start. Meanwhile, the RB depth chart is clearly a courtesy to the returning vets. Mike Tomlin has already declared that Bell will get reps with the first team offense which seems to indicate they’re practically begging him to seize a starting spot. Bell’s chief competition will be Dwyer, who came into camp in shape and hungry to start.

One of the more perplexing things on the depth chart has to do with special teams. The Steelers’ return game was atrocious last year, between the frequent penalties and all-around poor production. For whatever reason, they have Manny Sanders listed as top kick returner and Antonio Brown as the punt returner. Brown is needed as the team’s #1 receiver. I see no wisdom in risking him on punt returns. Besides, he handled punts last year, amassing a piddling 6.8 yard average. Surely they can find someone else to do the job?

Sanders on kickoffs is even more strange. Over the off-season, the Steelers signed one of the league’s more exciting kick returners in former Cardinal and Pitt Panther LaRod Stephens-Howling. LSH lead the NFL in kickoff yardage back in 2010. Why they’re sticking with Sanders when they have somebody whose main skill is as a return man makes no sense.

Maybe things will be clarified once the Black and Gold take the field. Make sure you check back here on Monday when I’ll share my thoughts on what transpired during the first half of totally meaningless football.