Kaye Cowher passed away from skin cancer a little over three years ago. Bill stood by the love of his life until the very end. Unlike douchebags like Tiki Barber (who dumped his pregnant wife for a pretty young intern) or Dan Marino (who had a bastard child with his mistress), Coach Cowher remained faithful for nearly 30 years. Please don’t bring up Kordell Stewart‘s sister, either.

Finding himself rich, single, and over 50, Cowher is naturally behaving like any other man undergoing a belated mid-life crisis. There are two options for guys like that: A) Buy a Mustang or B) Bang the craziest skank you can find. Clearly, Cowher went with option B.

To be fair, his choice isn’t as wild as others in his position. Her name is Veronica Stigeler although her stage name is Queen V. She comes from New Jersey and is in her early 40s, which isn’t the biggest of age differences. Oh, yeah, she’s also a rock chick.

I’ve never heard of her or her band but apparently she opened for Metallica, Billy Idol, Twisted Sister, and Bon Jovi. All fine musicians whose music I dig. She also recently released a 10 year retrospective CD titled “The Decade of Queen V,” featuring appearances by Lemmy from Motorhead and Tom Morello of Rage (and Guitar Hero). So she must have some decent musical chops. 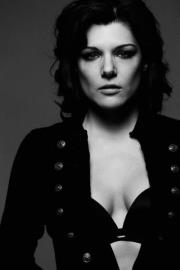 Of course, it also doesn’t hurt that she’s f#&king hot.

Full Disclaimer: I’ve always had a thing for Joan Jett. So heavily made up brunettes wearing skintight leather who rock are right in my wheelhouse. Hey, I’m from Carnegie, Bill is from Crafton… Must be a Carlynton thing.

Anyway, Queen V roped her new boy toy into appearing in her recently released music video (posted above). She’s not bad, they’re not The Clarks but who is?  I think she was going for a Game of Thrones deal although I’ve seen better costumes at the Ren Faire. Cowher appears as her bodyguard, sporting handcuffs and enough eyeliner to make Panic At The Disco proud.