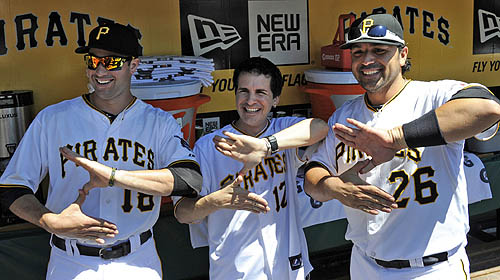 With the Pittsburgh Steelers suddenly the second most talked about sports team in the ‘Burgh, drastic steps needed to be taken. On the eve of what most experts expect to be another average season, the Black and Gold needed some of the Bucs’ mojo. So they did the only thing they could do. They signed Zoltan.

My sympathies go out to Drew Butler. He spent the preseason locked in a vicious battle with Brian Moorman over the punting job. It was a titanic struggle, easily equal to the best rivalries of our time: Red Sox-Yankees, Ali-Frazier, Rock-Austin. Every time one man would kick the ball a little higher, the other would immediately answer by kicking one a little farther. Butler would drop one inside the 20, Moorman would get so much hang time you could eat a Primanti’s by the time it came down.

It was truly epic.

When the smoke cleared and the 53 man roster was announced, Young Drew was the sole survivor. The last man standing. The leg who would lead the Steelers to the promised land, at least whenever they failed miserably on offense. And now Butler finds himself out of work, replaced by a guy who wasn’t even on the roster 72 hours ago.

The Steelers new punter is Zoltan Mesko. Zoltan was that rare punter who was actually drafted, taken in the fifth round by the New England Patriots back in 2010. Unlike the punter the Steelers wasted a pick on – Dreamy Daniel Sepulveda – Mesko lived up to the hype of being a Ray Guy Award winner. He’s been one of the league’s better punters, setting several records as a rookie. The Fighting Belicheats cut poor Zoltan strictly as a financial move – he was scheduled to make $1.3 million this season so the Pats decided to go with a cheaper option.

So this post contains some news about actual football players, I conclude by mentioning one other change to the 53 man roster. CB Isaiah Green, who beat out Josh Victorian and 2013 draft pick Terry Hawthorne for the fifth corner spot, was cut in order to make room for Antwon Blake. Blake was an undrafted free agent who played primarily on special teams for the Jacksonville Jaguars last season. He also saw some time at corner but at only 5’9, I don’t see him having much potential there. It would seem the deciding factor between Green, Victorian, and Hawthorne was who could contribute the most on special teams. Evidently, special teams coach Danny Smith felt Blake brings more to the table than all three.

And, hey, when it comes time for Blake to run down the field with reckless abandon to try and tackle the ball carrier, he can rest easy knowing the punt will be long and true.