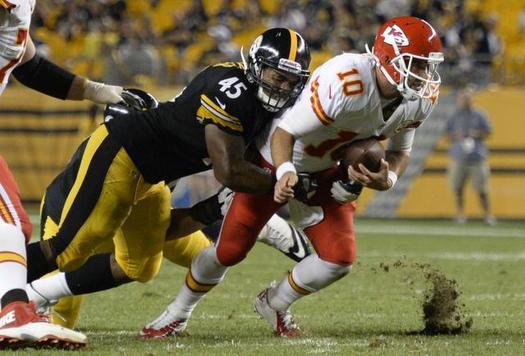 Eagle-eyed readers might notice my list and PFT’s list differ slightly. That’s because with Matt Spaeth being officially placed on IR, the Steelers have an extra roster spot. A spot they’ve decided to fill by moving linebacker Terence Garvin off the practice squad and on to the main roster. Garvin was one of a group of undrafted young linebackers who impressed during the preseason. Coming out of WVU, Garvin was considered the fourth best NFL prospect on the Mountaineers until character concerns knocked him off most teams’ radar. In a story that could only happen in West Virginia, Garvin and a teammate were arrested for stealing three bottles of Gatorade, two bags of pretzels, and a couple bags of Doritos from a – you guessed it – Sheetz convenience store. At least they didn’t assault any towel dispensers.

The two big names still on the practice squad are Justin Brown and Alan Baxter. Brown was one of this year’s sixth round picks but was outplayed by undrafted rookie Derek Moye. Brown is a big guy who flashed some potential so I’m okay with them stashing him on the practice squad. Baxter was another of those very impressive young linebackers. He certainly had a motor that didn’t stop  and always seemed to be around the ball. Baxter outplayed incumbent backup OLB Chris Carter until the final preseason game when Carter had two sacks to solidify his spot.

I am sure Baxter was among the last cuts as it came down to a numbers game. The Steelers wanted to keep eight linebackers (as I predicted) with the four starters + rookie OLB Jarvis Jones locked in. Fellow rookie Vince Williams showed enough at ILB to warrant a spot as well. This left Carter, Baxter, and fourth year pro Kion Wilson battling for the final two spots. The Steelers probably didn’t want too many rookies backing up the starters so Wilson got the other spot at ILB while Carter backs up at OLB opposite Jones.

The only real surprise on the practice squad is running back Alvester Alexander. Again, I have no idea what the Steelers see in this guy. I was surprised when he beat out Baron Batch during the first wave of cuts. He doesn’t appear to be particularly fast nor is he particularly big or powerful. Perhaps they’re just keeping him as insurance against injuries.

Of course, the practice squad is filled with insurance against injuries to the main roster. An insurance policy that we hope the Steelers never have to collect.