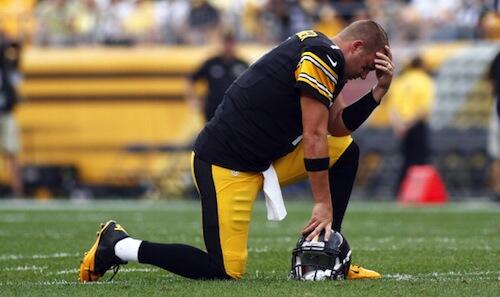 Words cannot describe how inept the Steelers appeared on offense. When Ben Roethlisberger hit Jerricho Cotchery for the team’s lone touchdown with a minute and a half left in the game, I actually saw people on Twitter posting “Nice of the offense to finally show up.” That’s insane. The offense never showed up yesterday. NEVER.

The Steelers managed a touchdown because up two scores with four minutes left, the Titans went into a soft zone/prevent type defense. They only rushed three men for most of that final drive. Had they stayed in their regular defense, the Steelers would’ve had that lone brainfart safety on the opening kickoff as the sum total of their efforts. Guaranteed.

Where to begin with what went wrong…

The new look offensive line looked terrible. All-Pro Center/professional cripple Maurkice Pouncey lasted eight plays into the season before guard David DeCastro cut blocked him into an early off-season. But let’s not put all five of Tennessee’s sacks on the loss of Pouncey. The entire right side of Marcus Gilbert and Ramon Foster was abysmal. Ben was under constant duress and between the pressure, handling poor snaps from emergency back-up center Kelvin Beachum, and absolutely no help from the running game, it’s a miracle he only threw one interception.

Let’s talk the running game, or lack thereof. Whose sister did Jonathan Dwyer sleep with to end up getting cut? Isaac Redman rushed 8 times for 9 yards. Evidently the Steelers coaches can’t see what everybody else can see so I’ll say it in nice bold letters; REDMAN IS NOT A STARTING CALIBER RUNNING BACK. The cherry on top of this shit sundae was Redzone even fumbled twice, which is supposedly the big knock Dwyer had against him.

With Redman proving inept, primary back duties fell to…. LaRod Stephens-Howling? Again, what are these coaches doing? I’m pretty sure every NFL game is televised and the tapes can be had with minimal effort. LSH was tried as a primary back in Arizona – he proved so ineffective they brought in Rashard Freakin’ Mendenhall to shore up the running game. How many carries did Felix Jones have? Zip. Zero. Nada.

The Steelers defense did what it could to keep the game within reach. As usual, there was a pronounced lack of splash plays with no turnovers and a lone LaMarr Woodley sack to their credit. Troy Polamalu was in position twice to come up with a big play – once in coverage on a deflected pass and once after a fumble he failed to recover – but couldn’t quite pull it off. Their effort wasn’t awful by any stretch as Tennessee’s only touchdown was on a short field after Ben’s pick and two of the three FG drives also began on our side of the 50. But when your offense is that bad, your defense needs to come up with impact plays to bail them out.

And to make impact plays, you need impact players. One name you barely heard yesterday was Jason Worilds. That’s because Jason Worilds is a mediocre player who shouldn’t be starting. As soon as rookie Jarvis Jones came into the line-up, he proceeded to do his best Jadeveon Clowney impersonation on a hapless running back.

I love Dick LeBeau but he’s an absolute dumbass for not playing Jones more. Who gives a shit if he doesn’t completely understand the defense. He makes plays! If Jones messes up a coverage or gets out of position, who really gives a f*ck? This team needs playmakers and if LeBeau doesn’t use one of the few he’s got, maybe it’s time to pack up and head off to a retirement community down in Florida.