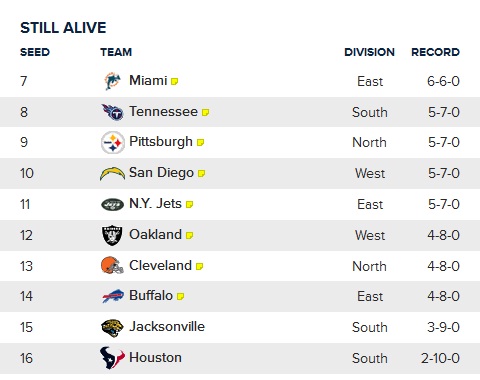 All things considered, Sunday was a pretty good day for the Pittsburgh Steelers. Their playoff hopes may have sustained serious damage after losing to the Baltimore Ravens on Thanksgiving but yesterday’s results show there are still signs of life. It’s not going to be easy and the margin for error is certainly razor thin. Although considering how the season started, even being in position to be playing meaningful games in December is quite a feat.

Let’s take a quick look at the AFC playoff picture as we enter the final month of the 2013 season. The chart above doesn’t show all the playoff teams which for our concerns would be the 6-6 Ravens, who are the current holders of the final Wild Card spot. The log jam of 5-6 has been broken up with only one other team winning on Sunday to move even at 6-6, the Miami Dolphins.

The rest of the contenders lost yesterday. And when I say the rest, I mean nearly ever possible playoff team. With the exception of Baltimore and Miami, every team that went into this weekend 4-7 or 5-6 went on to lose. Including the pitiful Cleveland Browns falling to the dreadful Jaguars and the Bills falling to the equally awful Falcons in Toronto.

Meanwhile, the Cincy Bengals did the Steelers a huge favor by putting away the Chargers, who were poised to be the team to look out for down the stretch. The Jets are in utter free fall, turning to third string quarterback Matt Simms after Geno Smith dropped another stinker. The Titans hung tough against Indy and could be a sleeper pick although it’s hard to envision them going undefeated the rest of the way.

Which is why I have a hard time riding with Baltimore from here on out. The Ravens are a deeply flawed team. They’ve won their last two so to win out they’d have to put together a six game winning streak. I simply can’t see that happening, especially when 8 of their first 12 games have been decided by a touchdown or less.

In many ways, the Steelers hold their destiny in their hands. While running the table isn’t absolutely essential – I still believe the second Wild Card could be 8-8 – winning out nearly assures them of a playoff spot. The other team ahead of them just so happens to be their opponents this weekend. If the Steelers beat Miami, the AFC playoff picture descends even further into chaos. Of course, at this point there is no if, that game is the very definition of a must-win.

With the NFL currently mulling over whether Mike Tomlin‘s sideline escapades deserve docking the Steelers a draft pick, I’m of the opinion that the Black and Gold might as well do what they can to make sure that pick comes as late as possible.