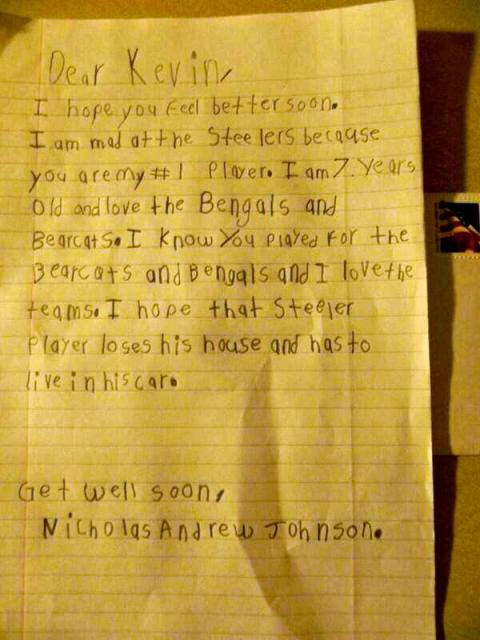 Pittsburgh Steelers linebacker Terence Garvin was slapped with a $25,000 fine for destroying Cincinnati Bengals punter Kevin Huber last Sunday night. C’mon, you didn’t really think Roger Goodell was going to let a Steeler get away with laying somebody out on national TV, did you? With a defense full of pansies and lousy tacklers, the Ginger Dictator has had precious few opportunities to indulge his favorite hobby of fining Steelers for playing football this season. His catered lunch slush fund must be dwindling dangerously low.

Poor Terence. As an undrafted rookie signed off the practice squad, Garvin is only making the league minimum for rookies which comes out to about $23,500 per game. Supposedly there’s a rule that the league can’t fine a player “a significant portion” of their game check so perhaps he can get his fine reduced. However, as things stand now, he’s about $1,500 in the hole for the privilege of lighting up a punter on prime time.

Speaking of little known rules, there’s evidently another one which Ginger used to stick coal in young Terence’s Christmas stocking. Unbeknownst to most football fans – and the referees for Sunday’s game – punters and kickers are considered “defenseless players.” Not when they’re in the process of kicking and their legs are in the air, they’re considered defenseless at all times.

And some people wonder why I saddle them with the “Not Football Players” tag.

I’m torn on the Garvin hit. I certainly feel it was a legal hit. He didn’t launch himself or lead with the crown of his helmet. In fact, his facemask hit squarely in Huber’s chest just like they preach on those hypocritical “Head’s Up” commercials. And if you watch the play, Garvin HAD to hit Huber. Huber was approaching Antonio Brown and while he probably wouldn’t have tackled AB, he could’ve pulled a Mike Tomlin and made him alter his speed/path just enough for a real football player to catch him.

Which brings up the idiocy of the NFL’s defenseless punter rule. Even noted Steeler hater Mike Florio wrote a piece today decrying it as a stupid rule. Colts punter Pat McAfee told reporters he felt the rule was an insult to punters and kickers. Of course, McAfee was born and raised in Plum. We don’t teach our kickers to be wimpy little cowards here in the ‘Burgh.

Legitimacy as men aside, the defenseless rule is stupid for one very practical reason. Punters/kickers often interject themselves in plays. Only a few years ago Steeler Nation got on Jeff Reed because he decided to run away from a kick returner rather than make an effort to stop him. If kickers/punters have the balls to try and make a tackle, they should be subject to getting blocked like any other member of special teams. Just because many of them are under 6 foot and a buck fifty soaking wet doesn’t mean they should get special treatment.

All that said, I mentioned being torn on Garvin’s hit. That’s because being one of the rare non-bloodthirsty football fans, I never want to see somebody seriously injured. And while I don’t think Garvin intended to break Huber’s jaw, he certainly set out to destroy him. It’s one thing to line-up a legitimate football player and jack him up – like Hines Ward did to former Bengals LB Keith Rivers. It’s another to pick on the smallest guy on the field because you’re a rookie trying to make an impression.

That’s called just being a bully. And nobody likes a bully.