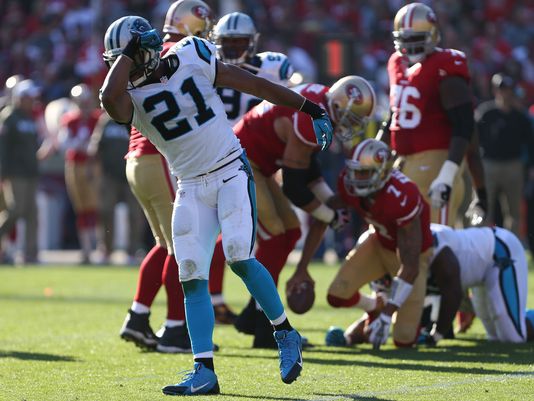 Ryan Clark spent last season auditioning for a job at ESPN. As Chuck Noll would say, it appears to be time for him to get on with his life’s work. The Pittsburgh Steelers have already found his replacement.

Mike Mitchell of the Carolina Panthers became the Steelers first significant free agent signing in nearly ten years. By “significant” I mean rather than their usual method of dumpster diving for back-ups and role players, Mitchell represents a first day signee who will be expected to start. Not only start but be an upgrade for a defense that has fallen off considerably the past couple seasons. Why else would they give him 5 years at $25 million ($10 million guaranteed)?

Mitchell’s story is in interesting one. Coming out of Ohio University – not Ohio State, not Miami of Ohio, the mighty Bobcats of Ohio U – he was seen as a raw talent who would make a good mid to late round pick. Then he ran a blazing 4.39 40 time and the Raiders – who else? – jumped all over him in the second round of the 2009 draft. Mitchell was something of a bust in Oakland, starting only nine games over four seasons. The Carolina Panthers took a flier on him last year and thanks to a combination of good coaching and steady playing time they were rewarded with a breakthrough season which saw Mitchell intercept four passes, force two fumbles, and accrue four sacks.

While this is a clear upgrade over Clark, who looked slow, old, and disinterested last year, there are some red flags to Mitchell’s game. For one, his entire resume as a starter was built on that lone season in Carolina. Probably not the biggest concern as Clark was a virtual unknown when the Steelers brought him over from the Redskins back in 2006. The more worrisome elements are his reputation for head-hunting and his penchant for missed tackles, both of which we already saw more than enough of from his predecessor. Of course, if your safety is making a large number of tackles you have other problems beyond that. Mitchell is said to be only average coverage although snagging four picks means he has the best hands of anybody in the Steelers secondary not named Troy Polamalu.

Speaking of Troy, this signing gives our future Hall of Fame safety a new partner for the foreseeable future. When he signed his three year extension a couple weeks back, I figured the Steelers were hoping to get at least two more seasons out of their Samoan Samson. Bringing in Mitchell clearly means that they see Shamarko Thomas as Troy’s heir apparent at strong safety rather than Clark’s at free. While it’s a bit disappointing that we blew this year’s third round pick on a guy not expected to contribute in a meaningful way until 2015, hopefully that extra time will allow Thomas to play at a high level right off the bat rather than taking three or four years to develop like it took Lawrence Timmons or Cam Heyward.

As for Clark, I can’t really say as I’m sad to see him go. He wore out his welcome with me two years ago when he started shooting his mouth off about every topic under the sun. The media calls him “outspoken” which is just a polite way of saying “your typical meathead athlete who thinks he’s intelligent because people are there to stick a microphone in his face whenever he opens his trap.” Clark has said he wants to continue playing for another few years but between his big mouth and increasing poor play, I’d wager we see him on ESPN getting into a verbal cripple fight with Skip Bayliss sooner rather than later.

In the meantime, the Steelers have a new sheriff in the backfield. And his name is Mike Mitchell.