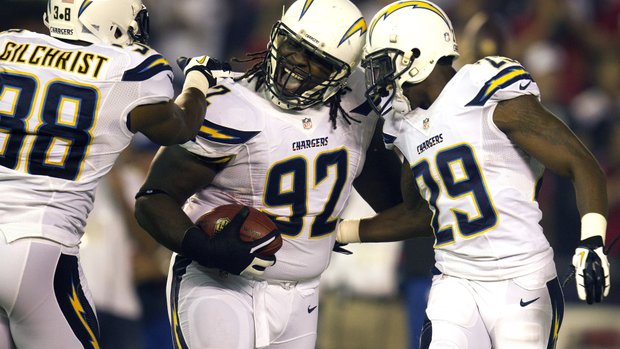 Thomas was a fourth round pick out of North Carolina back in 2010. He started ten games last season for San Diego before losing his job over what is rumored to be the coaches’ dissatisfaction with his effort level. From what I’ve read on Chargers blogs, Thomas was frustrating to watch because in some games he looked like a world beater while in others he barely bothered to show up. If the Steelers can properly motivate him – and while Mike Tomlin is about as inspiring as a shrieking parakeet, Dick LeBeau has traditionally inspired fierce loyalty in his men – they could kill two birds with one stone, so to speak.

The Thomas signing seemingly signals the team will try and solve their porous run defense by making him the stout anchor in the middle the team lost when Casey Hampton retired and sliding last year’s nose tackle, Steve McClendon, over to right defensive end. McClendon was atrocious at nose but I’ve always liked his size and athleticism so perhaps he’ll excel with the move. There is precedent as Brett Keisel began his Black and Gold career as a mediocre back-up NT before becoming the arrow-firing Diesel we all knew and loved.

With nose tackle and defensive end seemingly addressed, the Steelers are pretty well set at D-line for 2014. They can still draft somebody for depth but for now I think they’re pretty content with what they have. Especially when they have other more pressing areas of concern. Chief among them is depth at wide receiver.

Emmanuel Sanders finally settled on a new team to confound and disappoint, signing a three year $15 million deal with the Denver Broncos. Huh, I thought Santonio Holmes was a lock to sign there. In any case, the Steelers had no interest in bringing Sanders back after an injury plagued and ultimately disappointing 2013 campaign. They’re still on the hunt for his replacement, however.

In that vein, there’s distressing news that Jerricho Cotchery has a meeting set with the Carolina Panthers later today. The Cotch Rocket came out of nowhere to post a career high 10 TDs last season after moving into the starting line-up ahead of Sanders and rookie Markus Wheaton. He’s a nice dependable veteran the Steelers would surely love to bring back at a reasonable price. Unfortunately, the Black and Gold are still waiting on the bulk of the Woodley cap savings to clear (on June 1st) leaving them with only a few million to play with.

Unlike running back where there are a bunch of veterans still looking for work, the wide receiver market has all but dried up. Nearly every name has signed leaving Cotchery one of the few attractive options left. As such, it may not be possible for the Steelers to swoop in and pick him up on the cheap. Should he sign he elsewhere, I imagine they’ll forgo bringing in a veteran presence entirely and wait until training camp to see if they can rescue somebody from the waiver wire – which is how they picked up Cotchery in the first place.

It does leave the offense in a dicey position. Granted, the Seahawks showed you can win a Super Bowl with a group of mostly unheralded receivers but I’d still like some better options for Ben Roethlisberger and company. There’s no doubt in my mind the Steelers will use an early pick on a receiving threat – a lot of recent mock drafts have them taking Eric Ebron, who is an elite pass-catching tight end. Whichever way they go, there’s no question they need to add weapons. Antonio Brown is one of the league’s best and while Wheaton didn’t show a lot as a rookie, he should be at least as good as Sanders was in the slot. If they expect him to start, however, that could be extremely problematic.

While I understand the NFLPA loves putting off the draft as long as possible in order to give vets the largest window in which to hawk their services, the long gap between free agency and the draft sucks for us because it’s hard to accurately gauge where our depth issues currently lie. I do know the offense was easily our strength last year, particularly during that stretch run which saw them miss the playoffs thanks to one crooked referee. They’ve done an admirable job plugging some of the holes on defense with low cost spackle. Let’s hope in doing so they haven’t created some new ones on the other side of the ball.