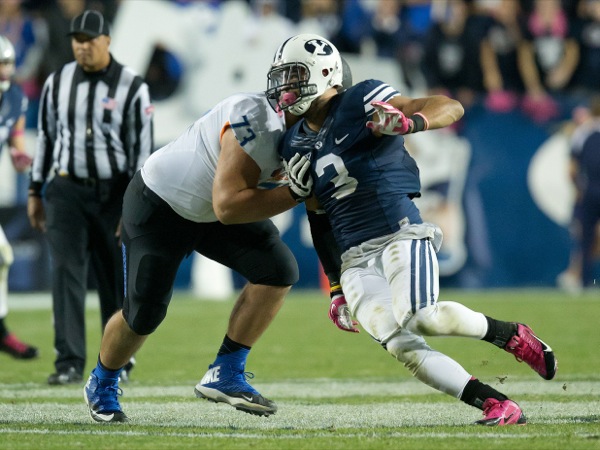 The Pittsburgh Steelers have put themselves into a very uncomfortable situation — mediocrity and lacking talent. Regardless of why, several positions are in dire need of help. Most would agree on the positions that need addressed — wide receiver, cornerback, defensive line.

Others feel as if inside linebacker, safety, offensive line and tight end are areas of need. I agree with all, but there are only so many picks that can be used in a single draft. Just because you need all of these things doesn’t mean that you draft one of each. Most draft picks will not work out anyway and some may not even make it through training camp. The Steelers must find contributors.

In the first round, I truly believe that the Steelers would be getting an enormous talent in Texas A&M receiver Mike Evans, should he be there. He is a monstrous target at 6-5, 231 and a mismatch for defenses to worry about. Evans is my favorite talent in this draft. He could be a star. He has all the intangibles that a receiver must possess, plus something that most do not, the ability to beat the jam and get behind a defense.

The second round is where the Steelers address their questionable depth at outside linebacker. Kyle Van Noy of BYU would be a tremendous pick. At 6-3, 244, Van Noy has terrific instincts always placing him around the ball. He had a huge junior season and should have declared, due to being a sure first-round pick. He had a down year his senior season, but it was still very good considering teams played away from him and that his junior season was off the charts. He has excellent motor and doesn’t give up on plays. Van Noy excels at chasing plays down in pursuit.

In the third, it is hard to find something wrong with safety Jimmie Ward of Northern Illinois. He is able to play every defensive secondary position. I foresee him being a playmaker. He has an excellent skill set, showing the ability to do whatever is asked of him and a nose for the ball. He can play man, press and anywhere in space to give depth to a defense. Plus, he’s a very sure tackler and an excellent special teams player. There isn’t a defensive coordinator out there that can have enough guys with a nose for the football. I feel he will be here due to size concerns (5-11, 193) and alleged character issues. Very brash and plays with attitude.

In the fourth round, Stanford inside linebacker Shayne Skov would be a strong selection. He is an emotional leader and diagnoses plays very quickly, arriving squarely with force to the ball carrier. Skov has the size — 6-2, 245 — to hold up at the point of attack. He is a nose first tackler that seeks contact and is a sure when he arrives. A DUI and an ACL injury could allow him to fall here. Skov would become a fan favorite due to the way he plays the game.

Injuries, character, size, etc. — all these things are worth the risk for someone in this position, especially if their talent level dictates they should be taken higher.

It would be tremendous for the fifth round to yield a pair of Mountaineers, defensive end Will Clarke and running back Charles Sims.

Clarke is a late bloomer who is a freak. At 6-6, 271, he is very well balanced and under control. Plays using his length to gain leverage on linemen. Clarke is able to occupy blocks as well as shed them. He’s adept at collapsing the pocket, causing hurried plays and disruption right where you want it most. He could be a force opposite Cameron Heyward. An athlete that is well worth a pick in the fifth round.

Sims is a playmaker that is versatile and can contribute on special teams. He had 45 receptions as a senior, showing the hands that Todd Haley will undoubtedly be looking for in the prospect that is selected. He possesses good size at 6-0, 214, and speed, running the 40 in 4.48. The fact that he is already able to contribute on special teams with his potential at running back should really stand out.

With the first pick in the sixth round, the Steelers should select defensive end Aaron Lynch of USF. He has a world of talent. When he is on, he reminds me of Shawne Merriman when he was turning out lights. The financial investment is meager. The risk is very small while his upside is huge. Joey Porter could make a reputation as a coach with Lynch. At 6-5 and weighing 250 lbs., Lynch has all of the tools to be dominant (36 in. long arms). He was very good as a freshman at Notre Dame. He lost a year transferring to USF and underperformed this past year, but is well worth the gamble.

With the second pick in the sixth round, the Steelers take 6-5, 320 lbs. of offensive guard — Spencer Long of Nebraska. Prior to an ACL tear, Long was considered a potential second or third-round pick. He is a very well rounded lineman, a grater in the run game and responsible in pass blocking. He got injured during his senior season with no recovery time to show, but there will be no restrictions going forward. That is why he is here.

With their last pick in the 2014 NFL draft, the Pittsburgh Steelers select wide receiver Brandon Coleman of Rutgers. At 6-6 and 225 lbs., he is a red zone threat immediately, using his size to box out defenders and win jump balls. Coleman had a terrific redshirt sophomore season that would have seen him drafted in the first or second round. He averaged 18.9 yards per reception for his career at Rutgers. Coleman in the seventh round, represents a Marques Colston type player in an ideal situation.

Well, there you have it! Seven rounds, nine picks and the hope of some of them contributing right a way. What I am looking for in each pick is someone that loves the game, and those that can hopefully put things together that will see them be drafted on potential. Also, I tried to pinpoint players that were constantly around the ball and have the ability to contribute on special teams.