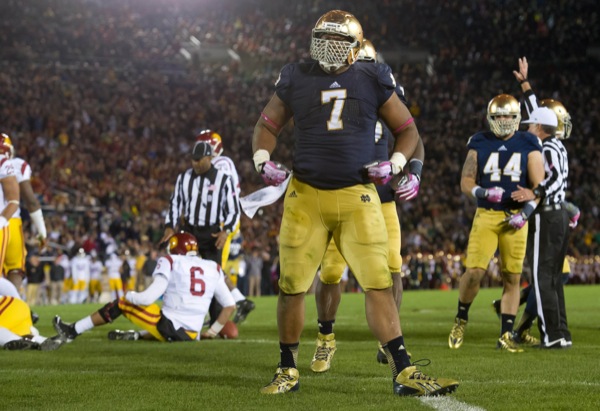 Stephon Tuitt is a behemoth. Tuitt stands well over 6 feet tall and weighs just over 300 pounds. He is the Pittsburgh Steelers second round pick and he is going to give offensive lines nightmares this season. Tuitt coming in seemingly ends the Brett Keisel days in Pittsburgh, but I’m okay with that and anyone who reads this should be too.

The scouting report on Tuitt is excellent. He looks the part of defensive lineman and has the prototypical size for a five-technique. Furthermore, Tuitt is great in the trenches and holds his ground very well, which comes as no surprise considering his size. He’s very athletic for his size as well, but that’s also not a shocker when you look at the dimensions on Tuitt. Sure the guy is over 300 pounds, but he’s also 6’7″ and that makes for a big, big man. Not a fat, out of shape lineman. This isn’t a Casey Hampton type of guy where he has to lose weight. Granted, Hampton played nose tackle. Tuitt is still in incredible shape and has the ability to be an excellent pass rusher.

While starting as a true freshman at Notre Dame, Tuitt compiled 30 tackles with three tackles for a loss as well as two sacks to boot. Oh, and he had a batted pass as well. He then got moved to a defensive end role in 2012 and collected 47 tackles with 13 tackles for a loss and 12 sacks. Tuitt had offseason surgery, but started all 13 games in that season. On top of it, he had 49 tackles, nine for loss, and 7.5 sacks to go with that.

The only thing that would really worry me about this kid is that he was pulled from the combine after it was discovered he had suffered a Jones fracture in his left foot and was required to go under the knife. It forced him to miss his March 1st pro day as well. However, Tuitt has proven his resilience when it comes to being injured. I think he’ll do that again and on the professional level this season. This kid is going to be fun to watch.