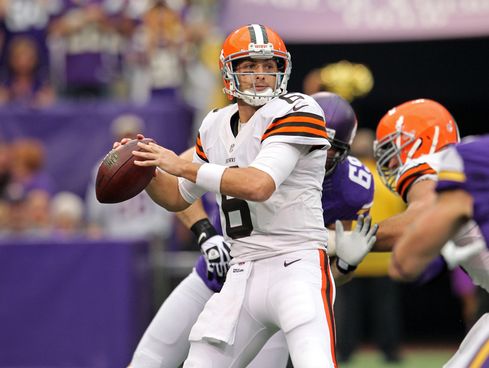 Welcome to the first “Know Thy Enemy” of the 2014 NFL season. Accept no substitutes! In previous years – going all the way back to my days running Nice Pick, Cowher – I used these posts to write an obnoxiously long insanely detailed breakdown of the upcoming game. It was a chore for me to write and (I suspect) a chore for most of you to read through.

So this year, I’m going to change things up a bit. Instead of an intro and then analyzing their offense vs our defense then our offense vs their defense, I’m just going to write some general thoughts/observations/expectations about us and our opponent. Hopefully, I’ll still get all the pertinent info across, just in more tidy format. This way it’ll be more fun for me to write and much easier for you to slog through.

With that out of the way, let’s talk about the Pittsburgh Steelers first opponent of 2014: the Cleveland Browns.Nothing like starting the season with your most hated rival. I’ve been guilty of writing how “the Rivalry” between the Steelers and Browns has been diminished in recent years because the Steelers have been among the league’s elite while the second iteration of the Browns has never quite gotten out of the blocks. I’ve since decided I was premature in declaring the Rivalry dead. Granted the Browns still haven’t accomplished anything of note but boy do they play the Steelers hard. In fact, Cleveland has beaten us enough times – and played us tough in many others – that even though they certainly deserved to be called our rival.

The Browns certainly made a big splash this off-season by being the team to draft Johnny Manziel. Of course, Manziel isn’t starting on Sunday, that honor goes to Brian Hoyer. A lot of previews seem to dismiss Hoyer as a temporary placeholder who will be supplanted by Johnny Football in short order. Those people either buy into the nauseating Manziel hype or simply haven’t paid any attention to Cleveland. Not that anybody can be blamed for ignoring Cleveland.

In reality, Hoyer showed what he could do for the Browns last season. Cleveland started 2013 off 0-2 when they finally tossed epic bust Brandon Weeden into the garbage where he belonged. Once Hoyer took the reigns, the Browns ripped off three straight wins and looked like a legit threat in the mediocre AFC North. Hoyer was lost for the season in that third game, leaving the Browns to put one putz after the other behind center the rest of the year. The result was a team that had some nice offensive weapons and a young tough talented defense ended up circling the drain because they couldn’t fill the most important position on the field.

Cleveland being Cleveland, they get Hoyer back but lose their most explosive playmaker to a season long drug suspension for smoking weed.  WR Josh Gordon put up insane numbers last year – he torched Ike Taylor for an embarrassing 200+ yards in our first meeting – but he’ll be rolling doobies from the comfort of his couch this year because Cleveland can’t have nice things. The Browns still have some nice pieces, such as ex-Cowboy Miles Austin and emerging superstar TE Jordan Cameron, but Gordon’s absence will certainly loom large.

Luckily, in true AFC North tradition, the Browns keyed their rebuilding effort on constructing a strong defense. They should be just as tough this year, if not more so with the addition of first round CB Justin Gilbert. Cleveland already had one of the league’s elite corners in Joe Haden but pairing him with Gilbert is going to create a dream secondary for years to come. Excellent linebacking duo Barkevious Mingo and Paul Kruger are joined this year by solid veteran Karlos Dansby, who had 6.5 sacks last year for Arizona. If the offense can give them any help at all, this could easily be one of the league’s better defenses.

Speaking of defense, the Steelers will unveil their new look unit on Sunday. While the offense sputtered out of the gate during the team’s horrific start, it was the defense which repeatedly let the team down during the stretch run. To their credit, the Steelers recognized the problem and overtook a pretty dramatic overhaul with no less than five new starters from last year’s opening day roster. Ex-Charger Cam Thomas starts at right end, splitting time with Brett Keisel while Cam Heyward looks to repeat his breakout 2013. Jason Worilds is also looking to prove last season wasn’t a fluke as he takes over for LaMarr Woodley with last year’s first round pick, Jarvis Jones, starting opposite him at OLB. Inside, there is no customary “red shirt” season for this year’s first rounder, Ryan Shazier. He’s starting immediately, pairing with Lawrence Timmons to form what may be the fastest linebacking corps in the league. The secondary welcomes safety Mike Mitchell, replacing slow old loudmouth Ryan Clark, while Cortez Allen looks to put last year’s injury-marred campaign behind him.

The Steelers offense will have some new faces, too. The heart is still there with quarterback Ben Roethlisberger looking to repeat what was arguably his finest season. Antonio Brown seems poised to pick up right where he left off last season as an elite playmaker and pass catching machine. It’ll be up to second year man Markus Wheaton to provide the offense a viable second option with veterans Lance Moore and TE Heath Miller adding a valuable possession element. RB Le’Veon Bell looked like a budding star once he got healthy and paired with LaGarrette Blount, the Steelers should have a pretty lethal ground game. Then there’s rookie Dri Archer, who looks like he may be the second coming of Darren Sproles.

For the first time in a long time, the offensive line is not a major cause for worry. This unit may not be the Hogs or anything but they seem like a solid enough unit that Big Ben won’t be running for his life every other snap. Pro Bowl center Maurkice Pouncey takes a break from injuries and night club brawls to anchor a group that didn’t allow a sack for nearly the entire final month of the season last year. If his return along with the addition of celebrated line coach Mike Munchak can elevate these guys to another level, a lot of the things that bedeviled the Steelers in recent years will be solved.

This will be an interesting year for the Black and Gold. They missed the playoffs two years in a row for the first time since the beginning of the aughts. Mike Tomlin isn’t on the hot seat – he’s snowed enough people into thinking he’s a good coach that the Rooneys will keep him around unless the season’s an utter catastrophe – but Steeler Nation isn’t going to take kindly to another Steeler-less January. We’re not the Pirates,  just hanging around the playoff picture until the end of the year isn’t good enough. We expect a team that not only makes the playoffs but makes a little noise while in there. And if 2014 is to be different than the previous two unsuccessful campaigns, it would certainly serve them well to start out on the right foot by beating one of our biggest rivals.