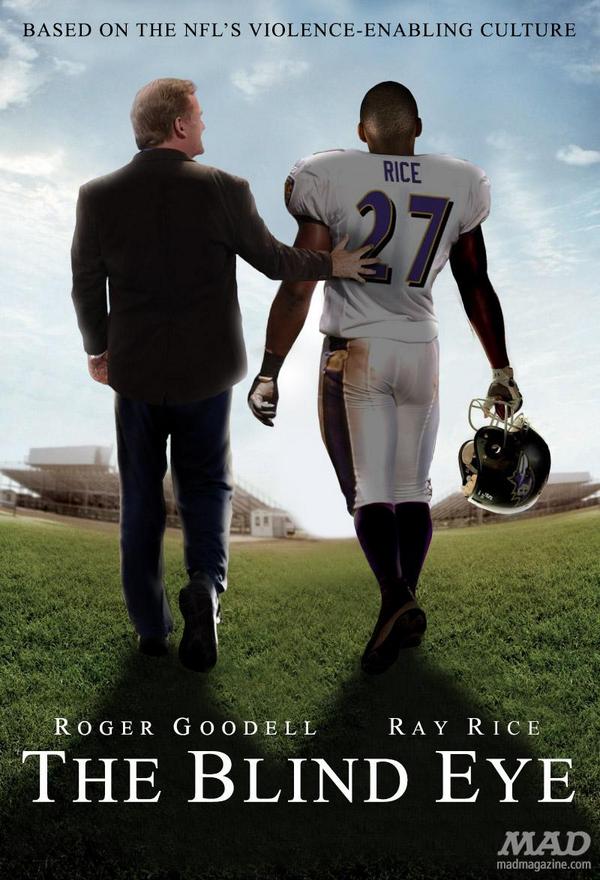 If you’re reading a football blog – particularly one dedicated to the Pittsburgh Steelers – chances are you’ve heard plenty about the Ray Rice fiasco the past couple days. The fact Rice has had his career nuked due to his reprehensible actions doesn’t interest me. Maybe some day he’ll be welcomed back by the Baltimore Ravens – perhaps they’ll even erect a freakin’ statue in his honor like they did for the murderous thug who played linebacker for them –  as nobody really expects better from a low class organization like the Ratbirds. But for now Rice is simply a lowlife scumbag who got exactly what he deserved.

What does interest me about the Ray Rice fiasco is the number of eyes it opened to the corrupt administration of NFL Commissioner Roger Goodell. In recent days, everybody from Keith Olbermann to former governor Ed Rendell have called for Goodell to resign. And those who haven’t gone quite that far are still taking Goodell to task for his absolutely inept handling of the entire situation. Nobody has to tell Steeler Nation, though, as we’re a fanbase that has long been familiar with the slimy little weasel who sits in the commissioner’s office.

No sports commissioner gets shit on more than NHL boss Gary Bettman. The amount of booing when he hands off the Stanley Cup or opens a draft has almost become a running joke. There’s no argument much of the vitriol is entirely deserved but there is also no conceivable way he is worse than Goodell. Bettman is mainly guilty of being inept, whereas Goodell’s sins are much more insidious. You’d have to go back to pre-Jackie Robinson baseball to find a league figurehead more devious, conniving, and utterly devoid of scruples than the Ginger Dictator.

Let’s take a quick look at the Goodell regime, shall we? At best he ignored the mountains of evidence regarding brain injuries and concussions – at worst he actively tried to cover it up – until a lawsuit brought by ex-players, those who haven’t died at an early age or committed suicide that is, forced him into action. He certainly covered up the New England Patriots Spygate scandal, first with a sham investigation and then by erasing the evidence. He did the opposite with another scandal, completely overreacting to a bounty hunting program instituted by the New Orleans Saints. Then we had Goodell’s beloved system of fines and suspensions which adhered to little rhyme nor reason: a guy never charged with a single crime was given a 6 game suspension (reduced to 4) while other players tried and convicted of crimes ranging from repeat DUI to domestic violence would often be punished less or not at all.

And we haven’t even touched on his baffling and frequently contradictory fine system.

This pattern of reckless authority has finally come to a head in the Ray Rice case. When people were outraged at the ludicrous two game suspension handed down after footage  surfaced of Rice dragging his lifeless fiancee (now wife) from an elevator, the league assured us all that it was a fair penalty given “the whole story.” Now that we’ve seen the whole story in the form of the TMZ footage of Rice doing a Chuck Liddell impersonation on a 100 pound woman, Goodell’s office is claiming they were in the dark as to the exact details. They claim they asked to see the tape but the casino where the assault occurred wouldn’t supply it.

Really? Then how did TMZ get it? Are you telling me TMZ, a site where half the stories come from schmucks who ambush celebrities as they’re coming out of restaurants, has more pull and better investigative resources than the frickin’ National Football League? That’s absurd.

One of two things happened, neither of which speaks well of the Ginger Dictator. The lesser of two evils is he never asked for the tape – which is what the casino claims – and instead relied on the Ravens version of the events. The Ravens, for their part, got their story from Rice himself which probably went something like, “She was drunk and wearing stripper heels then stumbled into my fist…” Again, you don’t expect better from a gutter dwelling organization like Baltimore but you do from the office expected to “protect the shield.” If this scenario occurred, well, the fact Goodell handed down punishment without doing even a half-assed investigation at the very least speaks to a man who is grossly incompetent.

Although it certainly better than option than number two: the Ginger Dictator was aware of the tape and is lying. Or maybe he really didn’t see the tape but was still given a detailed description of the incident. In either case, Goodell knew precisely what happened but figured the tape was in a vault somewhere behind lock and key. So he handed down that ridiculously light punishment hoping the entire incident would vanish quietly into the night. Back to Football everybody! Unfortunately for him, the tape got out and now he has to scramble around in Roethlisbergian fashion (irony alert) to save face.

Based on his corrupt and malicious actions over the past eight years, I certainly know which version I believe.