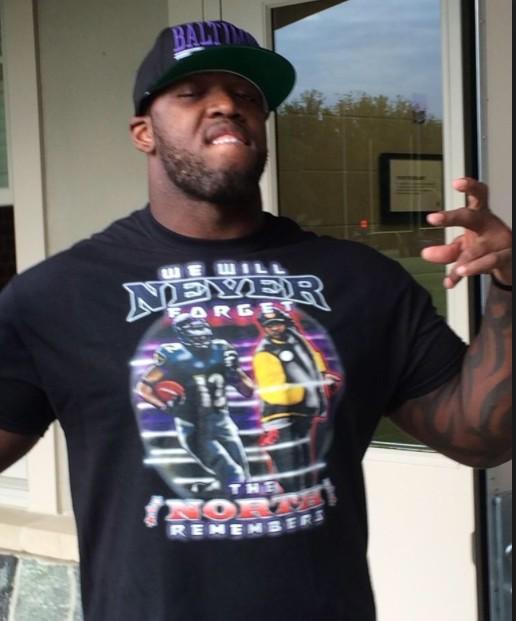 So, anybody know what’s been going on with the Baltimore Ravens?

As if preordained by the Football Gods, the team that has been at the center of a media firestorm this past week happens to be playing in one of the league’s featured prime time contests. When CBS chose Pittsburgh Steelers vs Baltimore Ravens for their inaugural telecast of Thursday Night Football, I imagine they did expected another epic chapter in one of the NFL’s most heated rivalries. They surely didn’t expect the Ratbirds to be one of the central players in an ongoing drama that spilled over to the mainstream media.

Of course, I’m sure they’re absolutely giddy about their good fortune. Although we’ll see if the network that paid the NFL a gazillion dollars to broadcast Thursday night games will have the balls to address the Ray Rice debacle in anything but the most superficial of ways. The talking heads on ESPN have been blasting away at the scumbaggery of Ray Rice and corrupt administration of Roger Goodell all week so I suppose anything is possible. After all, if the Four Letter’s throwing you under the bus, you know done a bad bad thing.

The ongoing firestorm over the league’s attempt to bury the Rice story and their subsequent cover-up that continues to crash and burn around them is a subject for another day. As insignificant as it seems to be when bigger issues are at stake, there’s still football games to be played. And while nobody’s season is made or broken in week 2, the bottom line is each team dearly needs a win tonight. The Steelers need a win to right the ship after blowing a 24 point lead to the frickin’ Browns and the Ravens need a win or the specter of the Rice debacle will only loom larger.

Both teams are coming off performance that left a lot to be desired. The Ravens lost a cripple fight to Cincinnati where the Bengals kicked five field goals (!?) then needed a miraculous juggling TD catch by AJ Green late in the fourth to snatch victory from the jaws of defeat. Baltimore’s offense under new OC Gary Kubiak sputtered along committing two turnovers and being generally impotent until Steve Smith (the former Panther, not the former Giant) got loose on a broken play and Joe Flacco found him for an 80 yard score. It should be noted Bert threw the ball 62 (!!!!!!!!!!!) times on Sunday as the Rice-less running game lacked punch.

See what I did there? Too soon?

Bernard Pierce and former Seahawk Justin Forsett are the Ratbird’s two-headed monster at running back. Forsett had the better game last week although neither one seem to be any great shakes. Of course, the Steelers run D woes look like they’re picking up right where they left off last season. The idea of carrying so many D-lineman was shuffling the bigs and in and out would keep them fresh and theoretically help improve the run defense. I guess it’s back to the drawing board on that since if an unheralded rookie from Towson can drop 100 yards on you, pretty much anybody can.

The defensive woes for both teams are in a way similar. The Ravens don’t get gashed quite as bad as the Steelers do but their secondary is shaky and the lack of splash plays kill them. Baltimore had no sacks and no turnovers last week. Both defenses are in transition as the teams work to replace the superstars who led them to glory in the recent past. In the meantime, both are desperately searching for players who can step up and pressure the quarterback or come down with that key interception like back in the glory days. Until either team finds that, they’ll both continue to struggle to keep other teams off the board.

Where the Steelers have a clear advantage is on offense. While they certainly went cold in the second half against Cleveland, there’s no denying the Black and Gold are littered with gifted playmakers. While the critics don’t want to hear it, Ben Roethlisberger is quietly thriving under Todd Haley‘s offense, especially now that they’ve decided to run a lot more no-huddle. Le’Veon Bell is fast becoming a superstar, capable of big plays on the ground and catching passes out of the backfield. What more needs be said about Antonio Brown? He doesn’t get the same press as Megatron or LarryFitz but he’s right there with the best of the best in the NFL. Every time he touches the ball there’s a good chance something special will happen. With Markus Wheaton and a healthy Heath Miller chipping in, this Steelers offense is unquestionably the strength of the team.

Baltimore’s offense is….in transition. After giving Flacco a ludicrous $120 million contract, they tried their best to surround him with enough weapons to make him look like an elite QB and not the game manager he was born to be. This year’s free agent deluxe was Smith, a temperamental but talented wide out who may be undersized but can still be a playmaker. Stiller Killer Torrey Smith is still around as is TE Dennis Pitta. Baltimore also has ex-Texan TE Owen Daniels, who missed the bulk of last season with an injury but before that was a pretty good safety valve in their high-powered passing game.

Once upon a time, Steelers-Ravens meant a tight low-scoring defensive battle between two teams that play things close to the vest. Times have changed. Nowadays, the best hope for a victory lies in the hands of the offense. The team that can make more big plays is the team that will win so expect things to open up quite a bit. It may only be the second week of the 2014 NFL season but I think I can safely say both teams sorely need a win.