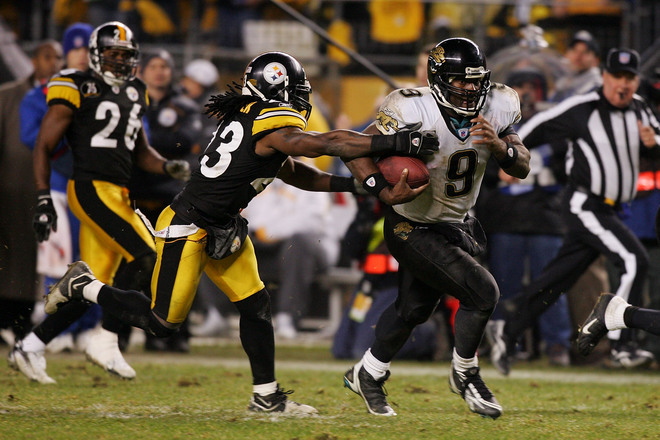 It couldn’t possibly happen two weeks in a row…

For the second consecutive week, the Pittsburgh Steelers will face an opponent that has gone O for the 2014 season. Sure, the Jacksonville Jaguars have proven to be a strangely troublesome foe – recall 2006 when Bill Cowher idiotically started a zombified Ben Roethlisberger and the team lost 9-0 or 2007 when the Jags beat us twice, including in the Wild Card game – but those glory days are long gone for the Jags. Jacksonville has been a laughingstock for years now. We couldn’t possibly crap the bed two weeks in a row, could we?

Yeah, I’m not sure I would put anything past this team, either.

Jacksonville has been pretty much terrible on both sides of the ball thus far this season. Their offense was 31st in the league so last week they finally made the move to start their 2014 first round pick, quarterback Blake Bortles. Bortles is a big strong-armed pocket passer very much in the Roethlisberger mold. He might be good one day but this is only his second start. Over the past decade, defensive coordinator Dick LeBeau has feasted on rookies, going an astounding 18-2 against them.

Bortles time may eventually come but certainly not until the Jags surround him with more talent. I don’t believe they have a single skill position player who would get on the field for the Steelers. Their top running back is slow-footed plodder Toby Gerhart. His back-up is former Michigan quarterback Denard Robinson. Their top three receivers are Cecil Shorts and a pair of Allens (Hurns and Robinson).  Their offensive line has allowed a whopping 20 sacks. It’s actually a miracle they’re averaging 14 points per game.

On the flip side, their inept defense is allowing an insane 38 points/game. If the Steelers don’t hang at least 30 on them, then something is rotten in Cleveland.  Jacksonville spent big to bring in former Seahawk DE Chris Clemons (three consecutive 11 sack seasons for Seattle) and he’s rewarded them with one lonely sack thus far. In fact, the Jaguar’s defense is like the Island of Misfit Toys – a patchwork group made-up almost entirely of cast-offs from other teams. Former Titan Sen’Derrick Marks also mans the line while former Buccaaneer Geno Hayes joins local boy (and former Bills standout) Paul Posluszny at linebacker. Jacksonville is so desperate, they even brought our old friend Ziggy Hood but the former first round bust basically serves as a back-up at this point.

The Steelers offensive line had a nightmare game against Tampa. Big Ben was under constant duress while Le’Veon Bell was lucky to run for 68 tough yards with minimal blocking. They had looked really good against Carolina so who knows what to expect from this group going forward. The bookends in particular, Kelvin Beachum and Marcus Gilbert, have to step up their game. It’d also be nice if they stopped taking stupid penalties.

Of course, that goes for the team as a whole. A week after the Steelers were penalized to a ludicrous degree, it’ll be interesting to see if they play with more discipline. The easiest way to let an inferior team hang around is to repeatedly shoot yourself in the foot by taking dumb penalties. It’s a lesson you’d think the Steelers would’ve learned three years ago when this problem of playing down to their competition first cropped up but here we are in 2014 and it continues to be a standard part of Mike Tomlin’s embarrassing regime.

The other major culprit in Tampa’s upset was a defense which continues to have problems producing splash plays. I like James Harrison but I’m not really sure why he played 2/3 of the snaps last Sunday. Arthur Moats has looked decent in his brief appearances and really deserves a chance to show what he can do. Any quarterback, even a human giraffe like Mike Glennon, will look like an All-Pro when he has all day to sit back in the pocket. Franchise Player Jason Worilds has been a no-show this year as has basically everybody on the line outside of Cam Heyward. When you have a secondary that absolutely sucks – and make no mistake, our secondary is terrible – the only way you give them a chance is by getting heat on the QB. Jacksonville may have a rookie QB and mediocre wide outs but anybody can make plays given 5 yard cushions in coverage and 30 seconds to survey the field.

It’s hard to proclaim any game do or die particularly when three months are still left in the season. We thought the Steelers were done for last year after their 0-4 start yet they came within a missed FG of making the playoffs. And our schedule this year is almost laughably soft. Outside of the Chiefs, Bengals, and maybe Colts there isn’t a game where you at least give the Steelers even odds of winning. So losing to Jacksonville would certainly not be the end of the world.