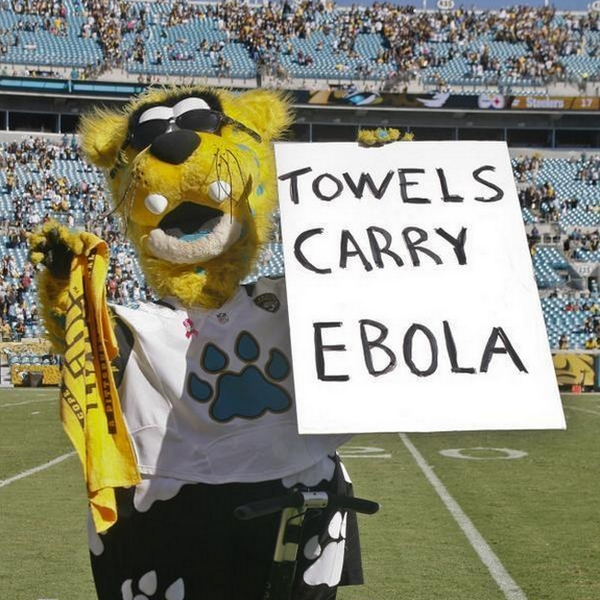 Although the one seen floating in Jacksonville’s pool probably has some kind of STD.

I didn’t see it during the actual telecast – either it happened while I was making a sandwich or the director had a whole lot more sense than whoever was in charge of the team mascot – but evidently at some point during yesterday’s game the Jacksonville Jaguar‘s mascot got a hold of a Terrible Towel.

That’s not difficult considering 3/4 of the massive crowd was there to root for the Pittsburgh Steelers anyway. Nor is it surprising. Picking on the Towel has sadly become an all too common occurrence as bonehead fans and clueless players don’t seem to care that proceeds from the Terrible Towel are donated to a school for developmentally disabled children. All they can see is the symbol of Steeler Nation.

Had the Jaguars mascot, who sports the positively porno-rific name of Jaxson DeVille – although I’d still prefer to go with “Steely McBeam” – stopped there, nobody but a handful of diehard Steeler fans would’ve called into local talk shows to bitch about it. What got everybody from the early morning shows on the major networks to the indignant windbags at ESPN talking was the sign Jaxson carried alongside the Towel: “Towels Carry Ebola.”

Ebola jokes, people! Because if you can’t laugh at the highly contagious devastatingly lethal virus which has already killed scores of people, what can you laugh at?

The Jaguars apologized for their mascot’s idiotic behavior. Some people called for Jaxson’s head – literally, they want him to turn in his head after being fired. I sort of agreed with that until I read the dude in the suit has been portraying the character for 17 years. I think a more fitting punishment would be for him to have to spend another decade in that heavy suit under the sweltering Florida sun trying desperately to get an apathetic fan base to cheer for their annually rotten team.

So no hard feelings here. Although between this, Steely getting busted for drunk driving a few years back, and the Pirate Parrot‘s history dealing coke, mascots seem to be even more troublesome cheerleaders. While they’re both equally useless, at least one of them looks good in booty shorts.