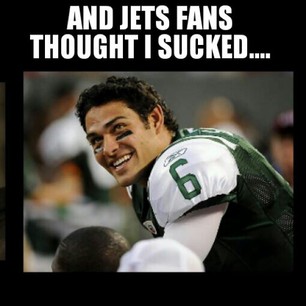 The Pittsburgh Steelers play two of the worst teams in the league over the next two weeks. Some might expect a clean sweep heading into their curiously late bye in week twelve. Those people probably haven’t been following this team the past few years. I fully expect the Black and Gold to find some way to blow one of the next two games.

Could the inevitable happen against the New York Jets?

On paper, it shouldn’t. The Jets have improved slightly since benching useless Geno Smith and installing Michael Vick at quarterback although that’s a little like saying Iron City is a improvement over horse piss. Vick can still make plays with his arm and his feet but remains a shadow of his former self. He also still has a habit of making the kind of boneheaded mistakes that got him labelled “coach killer” once upon a time except now he doesn’t make any amazing highlight reel plays to offset his blunders.

The Jets are one of the top rushing teams in football, mostly out of necessity. Their quarterback play has been so atrocious they really have no choice but to keep pounding away on the ground regardless of score or situation. Chris Ivory is actually their best back despite former Titan Chris Johnson being the team’s big name free agent acquisition. They’ve both gotten plenty of work for an anemic offense which ranks dead last in passing and two spots from the bottom in points per game.

New York tried boosting their pitiful passing game by acquiring Percy Harvin at this year’s trade deadline. Harvin has basically been a non-factor thus far. He’s a talented guy and certainly an upgrade to a receiving corps headlined by Eric Decker and Jeremy Kerley but he’s also a serial malcontent given to sulking when things don’t go his way. A moody wide receiver – whoda thunk it?

The Steelers defense has been on the upswing although this week they’ll be without Troy Polamalu. With all due respect to Troy, his absence won’t loom as large as it would have three or four years go. Make no mistake, he’s still a good player – a very good player even – but he’s not the Troy of old. Will Allen will take his place and should do a perfectly fine job. He doesn’t have Troy’s dynamic unpredictability but he’s also not going to freelance like Troy does – to the team’s occasional benefit and increasingly often detriment.

What will be most interesting this week is what we get out of Ben Roethlisberger and the high-powered Steeler offense. As one might expect from a Rex Ryan coached team, the Jets bring it on defense. Their numbers aren’t great although that’s primarily because they’ve been asked to pick up so much slack by their abysmal offense. To illustrate this point, note that they’re sixth best in the league in terms of yardage allowed yet rank 31st in points surrendered per game. That’s a tell-tale sign of a defense constantly put in bad positions deep in their own territory by an offense prone to turnovers.

If there is a weak spot to the Jets, it’s definitely their secondary. Since trading away Darrelle Revis a couple seasons back, their skill in coverage has declined precipitously. A once fearsome ball-hawking secondary now has exactly one interception on the year. Of course being a Ryan D, they do manage to bring heat on opposing quarterbacks. LB Calvin Pace and a pair of talented DEs, Muhammad Wilkerson and Sheldon Richardson, can get after the passer so our offensive line better bring their A game.

Assuming they give Ben time to make plays, there should be plays to be made. It’d be foolish to expect another 6 TD performance from Big Ben but we’re facing a team that had 43 dropped on them by Kyle Orton’s Bills and gave up 24 to a middling Chiefs offense. Somewhere in between those two numbers is a reasonable expectation for an offense that appears to be firing on all cylinders. It’d be nice for Le’Veon Bell to get back on track running the ball but I’m not sure this is the week against a team only allowing 88 rushing yards per game and with a pronounced weakness in the secondary. Not to worry, though, since I’m sure Bell will find some way to contribute as he seemingly always does.

The Steelers find themselves in, pardon the expression, a real dog fight in the AFC North. C’mon, you didn’t really think I’d make it through an entire Vick-related post without at least one reference, did you? Seriously, though, the Black and Gold are in easily the tightest division race in the league. It appears the teams will take turns beating each other which leaves these out-of-division games to be the deciding factor. In recent years, the Steelers have missed the playoffs precisely because they’ve lost games they had no business losing. If this year is to be different – and, for whatever reason, this year certainly feels different – it’s time they break that pattern and take care of business against the dregs of the league.