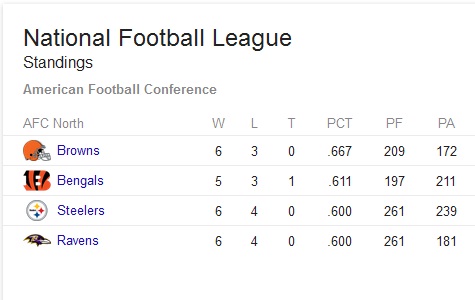 I think we’ve received our first sign of the apocalypse…

The NFL is unpredictable. Regardless of what the scamdicappers who advertise on late night TV may tell you, even the best gamblers are lucky to get half the games right on any given week. Never mind the fools at blogs who “preview” the next year’s games during the off-season or the media types who write preseason prediction articles. The reality is outside of the really really good teams and the really bad teams, it’s hard to figure where the rest are going to land.

Practically every preview I read for the Browns basically boiled down to “when Johnny Manziel gets a chance to start…” I have to plead guilty – when the Pittsburgh Steelers were blowing them out in the first half of the season opener, I tweeted that the Manziel Watch was officially on. Whether Johnny Football is the next big thing or not is a question that will have to wait for another day. The Browns have a good thing going and no reason to change it.

I  hate to be “that internet guy” who claims they knew all along but if you go back to my game preview before the opener, I did say to watch out for Brian Hoyer. The Browns played very well under Hoyer before he suffered a season-ending injury last season and I suspected the trend would carry over into this year. Don’t get me wrong, Hoyer isn’t the second coming of Tom Brady – his numbers really aren’t even as good as the ones Derek Anderson gave Cleveland during that one year he struck some Faustian bargain to look like an elite quarterback. In fact, Cleveland as a team isn’t even as good as they were last year in terms of sheer talent.

Last year, the Browns had skill players but no quarterback. This year they have a quarterback and no skill players. Their elite receiver (Josh Gordon) is sitting out a pot suspension while their budding star tight end (Jordan Cameron) has been hurt. Not to mention they lost the best center in football, Alex Mack, in their win over the Steelers. Even factoring in that the QB is by far the most important position on the field, it’s pretty amazing they’re doing what they’re doing with what they have. What’s scary is to think what they’ll be when both Gordon and Cameron return as expected in time for the home stretch.

The Browns lost to the Jaguars which is bad even on the Steelers level of bed-crapping. They played close competitive games against two of the worst teams in the league, Oakland and Tampa. Yet for all their faults, they still find a way to win. And that’s why I think Cleveland is the most dangerous team in the AFC North.

Baltimore doesn’t have the talent or depth they had in recent seasons. They’re kind of stuck in that weird limo where they’re talented enough to beat the bad teams but not quite good enough to consistently beat good ones. Cincinnati probably has the most talent but they’re cursed in the two most important areas in football: they have a dumb head coach and they have a mediocre quarterback who folds like a cheap lawn chair under pressure. The Steelers, well, I wrote a 1,000 word opus yesterday on how consistently inconsistent they are.

Analysis is fine and all but at the end of the day, it comes down to this: the Steelers, Bengals, and Ravens keep finding ways to underachieve while the Browns keep finding ways to overachieve. And while talent and coaching go a long way in the NFL there is a clear intangible element to winning. For whatever reason, the Browns seem like the only team in the North that come to play week in and week out. At 6-3, they have three really winnable games on their schedule (Texans, Falcons, Panthers). It’s not hard to envision them winning at least 9-10 games this season which should be good enough for the division title if not a Wild Card.

Of course, for all these hopes and dreams to come true, Cleveland still has to overcome the greatest obstacle of all. Namely, being the Cleveland Browns.