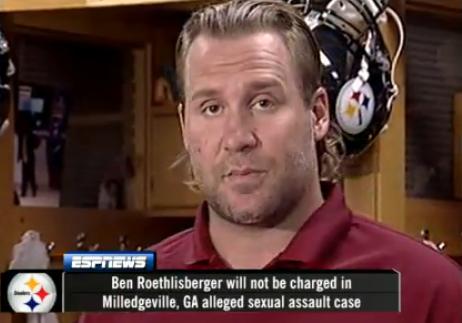 For those of you who ignore the news or don’t pay attention to celebrity gossip, a huge ongoing story this past month has been a series of rape allegations leveled against beloved comedian/Puddin’ Pop peddler Bill Cosby. Something like a dozen women, from average fans to aspiring actresses – not to mention the wife of Incredible Hulk Lou Ferrigno (Did Cosby miss the part about “Don’t make him angry…”)  – have stepped forward to accuse Doctor Huxtable of inappropriate sexual conduct. This being America, naturally lawyers are involved. It’s all a very sordid tale.

Well, comedian Chris Rock decided to sound off on the Cosby controversy by calling Pittsburgh Steelers quarterback Ben Roethlisberger “the original Cosby” at a movie premiere on Tuesday.

Of course the premiere was in Baltimore. Why was Rock debuting his new movie in Baltimore of all places? I suppose if your script calls for a decrepit urban hellhole you film in Baltimore but other than that I don’t know why he’d be showing his film there. In any event, I’m not going to get too worked up over it because obviously he was playing to his audience of rabid Steeler Haters.

I do find it ironic that he would pander in Baltimore of all places. You know, the city that has a statue of Ray Lewis outside their stadium. The same Ray Lewis who was convicted of obstructing a murder investigation. The same Ray Lewis who was the scene of said murder but conveniently “lost” the clothes he was wearing that night then paid the victim’s family hush money to make the whole thing go away. Talk about living in glass houses.

I’m not going to rehash the Roethlisberger situation for the billionth time as everything that’s been said on the subject has been said. By now, the people who think he got away with one or two rapes are going to keep right on thinking that while the people who see the discrepancies and the fact he was never formally charged by either woman as evidence of his innocence aren’t going to change their opinion either. What I do find interesting is the hardcore hatred of Big Ben by the former group, especially in light of the apparent forgiveness of so many other sports-related miscreants.

Kobe Bryant was accused of raping a teenager at a ski resort. Investigators found evidence she had banged a few different men around that time so the chargers were dropped. As far as I can tell, Kobe is still one of the NBA’s more popular players. Niners quarterback Colin Kaepernick was in a Miami hotel room where a woman called the police to report she had been raped. Kaep admitted to police he had sex with the woman although she was evidently acting like a total nutjob (gee, kinda like that first woman who accused Ben) and couldn’t find any evidence of assault so charges were dropped. I still see Kaepernick in national commercials hawking overpriced headphones and the like.

Mike Tyson, the guy who actually did go to jail for raping a teenage beauty pageant contestant, plays a loveable figure in “The Hangover” movies and even has an amusing cartoon on Adult Swim. Lewis is a commentator on ESPN, where he’s been known to give vomit-inducing lectures on personal conduct to the league’s current crop of lawless miscreants. They’ve both been forgiven.

So why hasn’t Ben? I have my suspicions – starting with the one thing Ben does not have in common with all the aforementioned men – but it continues to boggle the mind. Will enough ever be enough? Or will I indeed still be writing about this for years to come?

Sadly, I suspect I will.