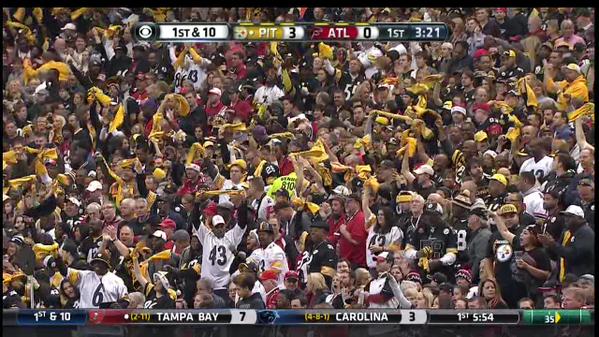 The Pittsburgh Steelers have ended their run of two straight 8-8 seasons, notching their ninth victory of the season with a 27-20 win over the Atlanta Falcons. They also put themselves in excellent position as far notching their first post-season appearance in as many years. While the Black and Gold did not clinch anything yesterday, a win in either of their final two games gets them in. Sweeping the final two nets them the division title although other than it being a home game the division isn’t really that important as the AFC North champion is almost certainly going to be playing on Wild Card Weekend.

The Falcons are in the thick of their division race despite coming in at 5-8. Granted they were without superstar wide receiver Julio Jones but they definitely had the look of a 5-8 team. Their lowly defense, ranked last in the NFL, actually didn’t play too poorly. Of course, I may just be saying that because our defense looked every bit as atrocious as theirs was billed as being.

Everything went nearly according to script in the first quarter. The Steelers came out firing on offense and put together two really nice drives to start the game. Once again – stop me if you’ve heard this before – things fell apart inside the red zone and they ended up settling for field goals instead of touchdowns. I’m not complaining about the offense because, let’s face it, it’s far and away the strength of the team (Sorry, Haley Haters!) but if they could just finish off one more drive every game a lot of these close wins wouldn’t be so close and a lot of these close losses might even be Ws.

Anyway, while the offense was moving the ball well, Atlanta couldn’t get out of the blocks. Then, on the opening play of the second quarter, William Gay jumped a route and picked off Matt Ryan and ran it back 52 yards for a touchdown. It would be the first and last highlight of the day for our beleaguered secondary. I’m not sure what can be done to help them besides, “Let’s hope our offense scores a bunch of points!”

Later in the quarter, Atlanta finally got on the board although it was as much due to the referees as the Steeler D. Gay got burned for 30 yards by Roddy White to set the Falcons up deep in Pittsburgh territory. On second and 8 from the 35, Jason Worilds came free on a blitz and planted Ryan square in the chest. The zebras saw roughing the passer despite Worild’s hitting him so cleanly they could use the play in one of their Heads Up instructional films. Atlanta took the gift and converted it to points when Ryan hit our old friend Devin Hester for a 17 yard TD three plays later.

To their credit, the offense answered with a 12 play 80 yard touchdown drive of their own. The key play was a 28 yard pass down to the Atlanta 1 where Antonio Brown made an incredibly athletic catch, getting one foot down and then dragging his toe with only the smallest amount of turf to spare. Le’Veon Bell blasted in on the next play to give the Steelers a commanding 20-7 halftime lead.

As usual, the second half started and things immediately took a turn for the worse. Atlanta marched right down the field thanks to a 46 yard pass play to Hester. Raise your hand if you’re shocked Hester (5 catches 85 yards)  had by far his best game of the season against his old nemesis. Once a Stiller Killer, always a Stiller Killer I guess. Well, the defense did a nice job inside the red zone and it was Atlanta’s turn to settle for 3.

The Steelers tried to kill some clock by running the ball in the second half but the Falcons were having none of it. For such a terrible defense, they did a really good job on Bell, holding him to only 47 yards. Sure, he caught 5 balls for 72 yards and he would later have a sweet 13 yard TD run which would prove to be the game winner but to hold the league’s most exciting back under 50 yards is certainly an accomplishment. The inability to mount a running game no doubt contributed to some of the red zone problems and definitely caused the defense to get overexposed.

Like I said a couple weeks back, our defense is strange in that they have X number of good series in them. Once they offense starts sputtering and they’re put on the field with too much frequency, things fall apart. Yesterday, injuries certainly didn’t help matters as Lawrence Timmons, Troy Polamalu, and Mike Mitchell all left at various points after getting banged up. Still, there’s only so many excuses you can make for this unit.

With James Harrison sitting out, the bulk of the playing time at OLB went to Jarvis Jones. Jones did not record a tackle. Not a SINGLE tackle. Worilds notched a whopping one. Meanwhile, the secondary gave up 131 yards to Harry Douglas in addition to the 85 to Hester. We saw why Mike Tomlin was willing to re-insert Ike Taylor into the starting line-up as Antwon Blake was repeatedly victimized in coverage. Gay and Mitchell also had some less than stellar moments for a secondary that really doesn’t seem capable of stopping anybody.

The offense pounded out another 80 yard drive that was capped by Bell’s 13 yarder early in the fourth quarter. The 14 point lead was just enough for our defense to bend (aka give up a TD on the ensuing possession) but not break. Ben Roethlisberger, who threw for 360 yards but no touchdowns or interceptions, put the game away with Todd Haley‘s second ballsy call in as many weeks, a roll out pass to Heath Miller for 25 yards on 3rd and 1. Ben and AB (10 catches 123 yards) were undoubtedly this week’s offensive heroes although really the entire offense is playing very well right now.

I’ll be honest, I didn’t expect to win this week. With two big games with playoff implications on the horizon, I sort of expected the Black and Gold to sleepwalk through this week’s game. Perhaps the fact Steeler Nation descended upon the Georgia Dome in ridiculous numbers to turn this “road game” into a virtual home field gave them the cure for their road blues. Whatever the case, the Steelers have nine wins which means they’re assured of a winning season and all but assured of a playoff berth. After what we’ve seen the past couple seasons, it’s hard to be anything but satisfied with how things have shaken out.