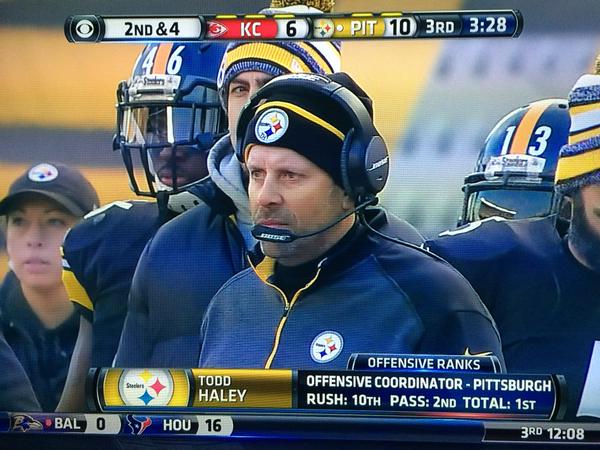 I call this win solid because for the first time this year, the Steelers performed well in all three phases. Nobody on offense put up huge numbers and there weren’t any memorable splash plays but as a group they moved the ball almost effortlessly against what was billed as a superior defense. Ben Roethlisberger was an efficient 18/25 for 220 yards, Le’Veon Bell had 63 yards on 20 carries and both Heath Miller and Antonio Brown caught 7 balls for 68 and 72 yards respectively. All this added up to scores on four of their six drives.

The only reason Todd Haley‘s top ranked offense (How do you like him now?) didn’t score more was the defense had trouble getting off the field. Yesterday’s defensive performance was a classic case of bend but don’t break. They did a fantastic job against Jamaal Charles, limiting him to only 29 yards rushing. However, they made game manager Alex Smith look like Dan Marino Lite as he chucked the ball an unheard of (for him) 45 times for 311 yards.

KC scored on four of their seven drives although in each case they were held to only a field goal. The line and linebackers, who seemed more fired up than any time in recent memory, put forth a dominating performance. Cam Hayward was an absolute beast while the time off seemed to rejuvenate the returning James Harrison. Jason Worilds had two of the team’s six sacks. Meanwhile, I’ve been remiss in not talking about the play of the inside linebackers. Lawrence Timmons is having an All-Pro type year highlighted by his crushing hit on a fourth and 1 play that ended a KC drive deep in Steeler territory. Meanwhile, youngsters Vince Williams and Sean Spence have both been revelations this season. Williams had seven tackles yesterday while Spence chipped in with three more.

Gee, I sure am glad we spent that first round pick on Ryan Shazier instead of a corner…

While the front was doing excellent work, it was once again the back end causing a lot of problems. Troy Polamalu sat out to rest his balky knee although I’m not sure his presence would’ve helped the coverage a whole lot. Antwon Blake continues to confound as he gives receivers ridiculous 10 yard cushions which allow for big plays then comes up with big plays of his own when asked to cover tight man-to-man. Blake single-handedly saved a touchdown in the second quarter when he knocked the ball away from Bowe in the end zone. Blake, William Gay, and Brice McCain struggled in space but excelled once KC got into the red zone. While allowing drives of 11, 12, 12 and 14 plays doesn’t exactly scream “Steel Curtain” it’s hard to be too down on a performance where they didn’t allow a single touchdown.

One thing that does bear mentioning is that this was by far the worst officiated game I’ve seen in a long time. The announcers kept bringing in retired referee Mike Carey to comment on challenges and the on-field officials kept making the exact opposite call to what he suggested. Either Carey was the worst ref ever or these guys had no clue. As somebody who remembers Mike Carey, either option seemed plausible.

Then came a play in the fourth quarter which may be the single dumbest call I’ve seen in all my years of watching football. With KC facing a third and 16, the Steelers defense rallied to hold them to a short gain. Gay then committed the apparently unpardonable sin of folding his arms to his chest in front of Timmons with nary a Chief within ten yards of either of them. He was flagged for Unsportsmanlike Conduct, gifting KC fifteen yards and a first down. Meanwhile, Chiefs and Steelers alike were doing far more elaborate celebrations after sacks or first downs all game long with not a single flag being thrown.

That was only the most egregious of the many many mistakes this crew of incompetent zebras made. There was an incomplete pass to tight end Travis Kelce somehow ruled a catch. Two plays later, Charles “fumbled’ on a play where his knee looked to be down. I saw guys literally jump on AB’s back in the end zone on at least two occasions with no penalty. Then there was the second worst mistake made by these nincompoops – missing a legit personal foul on a Chief lineman who decided to go all Cobra Kai and sweep Big Ben’s leg by clearly trying to trip him intentionally. Ben managed to complete a touchdown pass to Brown after colliding knees and while he was limping noticeably, he didn’t miss a snap and assured everybody in the post-game that he was alright.

Still, all we hear about is how this new sissified NFL is supposed to “protect the quarterback” yet the game’s most dangerous play goes unnoticed while hazardous arm crossing gets flagged.

In any case, the Steelers rose above both the Chiefs and the insipid referees to take control of their own destiny heading into the final week of the season. Whatever happens next Sunday, the Steelers are assured of at least a Wild Card berth in the first round of the playoffs and with some breaks here and there could even find themselves as the third overall seed in the entire AFC. I’ve been saying for awhile now I don’t really know what to expect from this team – before the season started, heck, after the first half of the season if you had told me the Steelers could be the third seed in the playoffs I would’ve called you crazy. Well, the Black and Gold have defied expectations.

Let’s hope they can continue to defy them for many more weeks to come.