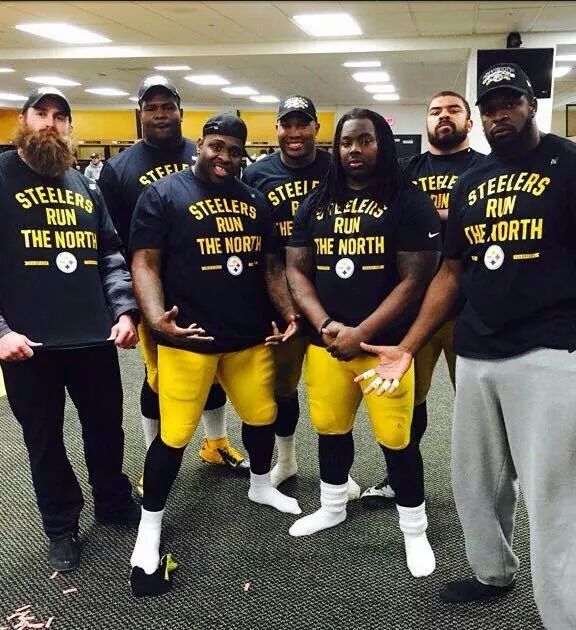 For the first time since 2010, the Black and Gold are your AFC North champions thanks to a resounding 27-17 victory over the Cincinnati Bengals. The game itself was another solid performance by the Steelers in all three phases. The win catapulted them to the #3 seed and the privilege of hosting a playoff game at Heinz Field this weekend. However, every bit of good news was overshadowed when superstar running back – and team MVP – Le’Veon Bell left the game after taking a vicious hit to the knee early in the second half.

The latest prognosis is Bell suffered a hyper-extended knee but no structural (ie ligament) damage occurred. While that’s good news as a tear would’ve ended his season for sure, it’s nearly impossible to imagine him playing against the Ravens on Wild Card Saturday. Hines Ward famously played through a badly sprained MCL in the 2008 playoffs although running backs take a lot more physical abuse not to mention he was never really the same again. I want Bell back as soon as possible – not only is he the best all-around back in football but I also hope the Steelers take the future into account when/if he’s allowed back on the field.

In the meantime, we’ll have to get by with Dri Archer and Josh Harris – why, oh, why did LaGarette Blount have to turn out to be an imbecile?

About last night’s game, well, it was a national game so I’m sure most everybody saw what happened. Andy Dalton gotta Andy Dalton as he continues to make the Bungles look like geniuses for giving him that ridiculous contract this past off-season. The Killer B’s might have to induct Brice McCain as a honorary member after he picked off the Red Rifle twice. McCain isn’t the greatest corner in the world but at least he doesn’t have hands of stone and is actually able to make a play when a ball is dropped right into his lap.

By the way, can somebody please tell the idiots at NBC that Ike Taylor sitting out is not a huge blow to the defense? They keep showing him on the sideline like his presence is some devastating loss when he almost single-handedly kept Cincy in the game during our first meeting this season. The trio of McCain, Antwon Blake, and William Gay aren’t going to make anybody forget about the Legion of Boom but what they lack in talent they make up for in hustle and football smarts. They’re not the best secondary in the playoffs but they’re the best we’ve got.

While the defense did a decent job, last night was definitely the  Antonio Brown Show. AB caught 7 passes for 128 yards capping a season where he led the NFL in nearly every significant receiving category. He got the Steelers on the board first with an incredible punt return where he reversed field and took it back 71 yards for a TD. He’d cap the scoring with an equally amazing 63 yard TD catch where he caught a 10 yard out along the sideline then cut back inside, made two Bengals miss, outran two more, then shoved Martavis Bryant out of his way on his way to the end zone.

Thankfully, he didn’t do a stupid backflip on that score. Did Mike Tomlin talk to him on the sideline? Did Tomlin *gasp* actually exert discipline? I don’t know but if his post-game jaw-jacking encounter with Reggie Nelson was any indication, Coach T was as fired up on Sunday as I’ve ever seen him.

With a loss on Sunday, the Tampa Bay Buccaneers are officially on the clock with the first pick in the 2015 draft. The Steelers lost to the worst team in football yet somehow rebounded to be the 3rd seed in the AFC Playoffs. If that doesn’t tell you how crazy a season this has been, nothing will. NBC, who had already tabbed the Black and Gold for the Saturday night 8:00 showcase game, got their dream match-up as Steelers host the hated Baltimore Ravens in the latest chapter of their epic rivalry. With four straight wins over mostly quality opponents, it’s hard to argue they’re one of the hottest teams heading into the post-season.

Can the Steelers make a run this year? At this point, nothing surprises anymore.