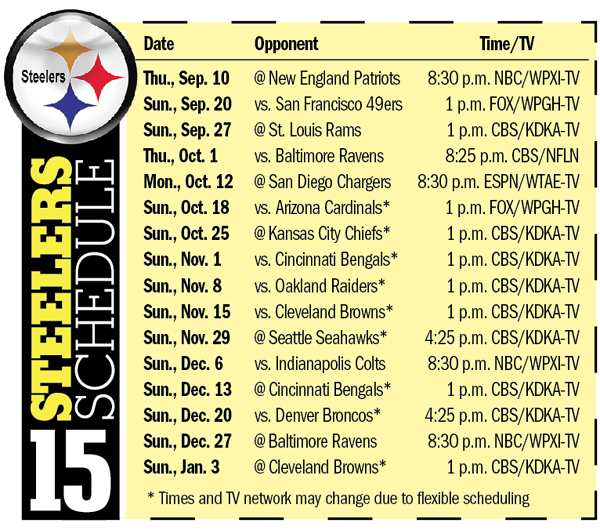 At least they won’t have to worry about getting rusty…

The Pittsburgh Steelers were already set to usher in the upcoming preseason by playing in the annual Hall of Fame Game in Canton. Turns out they’re going to kick-off the regular season as well. The Steelers will play in the 2015 NFL Season Opener against the Super Bowl champion New England Patriots on Thursday night September 10th. I can only imagine Tom Brady‘s girlish squeal when he found out his team drew one of the league’s worst defenses right out the gate.

Not that the rest of the schedule looks any easier. Broncos, Chargers, Colts, Seahawks…the Steelers are set to face a murder’s row of elite offenses this year. If the defense is as bad as we all fear it appears to be on paper, well, this might be a long long year for Steeler Nation. Then again, the year they had what was statistically the hardest schedule of any team in NFL history, they ended up going to the Super Bowl.

One interesting side note – evidently the Thursday night season opener doesn’t count as a prime time game. Teams are limited to four prime time games per year but as you can see, the Steelers have four others scheduled in addition to the opener against the Pats. So you out of towners who don’t wanna pony up for DirectTV are in luck as it appears there will be plenty of national exposure for what is shaping up to be a fascinating trainwreck of a season.