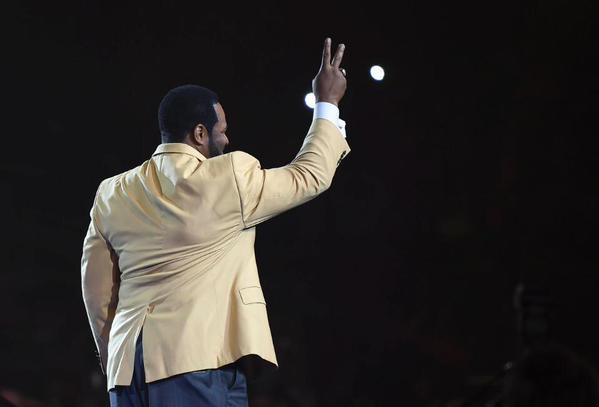 The state of Ohio may belong to the Browns and Bengals but the city of Canton certainly belongs to Steeler Nation.

If you’ve never been to the Pro Football Hall of Fame, it’s something that belongs on any sports fans’ Bucket List. It may not hold the almost mythic reverence associated with Cooperstown but as someone who enjoys frequenting museums of all types, it’s an experience second to none. Of course, the highlight is the collection of busts representing each inductee. Doesn’t hurt that you can’t take three steps in that room without coming across a member of the Pittsburgh Steelers.

Most of the Steelers in the Hall come from the Steel Dynasty of the 1970s. There have been a few more members of the Black and Gold enshrined since then but generally speaking we have yet to get to the guys responsible for our most recent run of glory. Until now, that is. And how fitting that the first man inducted from this era is Jerome Bettis.

The Bus is a beloved figure here in Pittsburgh, as much for his affable personality as his bruising running style. He was obviously a special talent but his presence here in the Steel City was a rare confluence of a player’s style meshing perfectly with the attitude of the town he plays for. Steeler fans love hard nosed football and they love having fun. Jerome Bettis spent is career doing both.

Or, rather, he spent his career in Pittsburgh doing both. Almost forgotten – although certainly not by him, as anybody who read his autobiography or who caught the line “I got traded to Pittsburgh, and the love came back” in yesterday’s speech – was he started with the (then) Los Angeles Rams. People often talk about the Herschel Walker trade in terms of being one of the most lopsided deals in NFL history but consider the Steelers got the 6th leading rusher in NFL history for the bargain price of a second and fourth round pick (and got a third rounder back, to boot).

No wonder Bettis made sure to give a shout out to team patriarch Dan Rooney by saying, “Mr. Rooney, thank you for believing in me. For seeing the person I am first, & the football player second.”

The Bus’s career stalled with the Rams but flourished here in Pittsburgh. Once he arrived, he rewarded the faith Mr. Rooney and Bill Cowher placed in him by ripping off six consecutive 1,000 yard seasons. Which isn’t to say it was all smooth sailing. One of the great ironies is the team made the Super Bowl the year before arrived in 1996 – and would’ve won it had they not trusted bought-off-by-Jerry-Jones Neil O’Donnell and called two idiotic pass plays when they were tearing through the Cowboys on the ground – thanks in large (no pun intended) to the bruising running of Bam Morris. Morris imploded that off-season, getting busted for drugs which ultimately derailed his entire career, and led to the Steelers making the trade for Bettis.

After Bettis arrived, the team had plenty of success but another Super Bowl appearance eluded them both until what would turn out to be his final season. That final season would feature three of the four most memorable moments in his career (the fourth being the infamous Thanksgiving Coin Flip Fiasco). Despite basically losing his starting job to Fast Willie Parker, Bettis posted a 101 yard 2 TD performance in a crucial Week 14 game against the Bears that was highlighted by his epic goal line trucking of Brian Urlacher. A few weeks later, he (literally) gave Steeler Nation a heart attack when he fumbled in a Divisional Playoff game against the heavily favored Colts, only to be saved by the tackling skills of Ben Roethlisberger and a rare miss by kicker Mike Vanderjagt. Then in his final game, Super Bowl XL in his hometown of Detroit, he had the other big run, a key 12 yard rumble that ultimately iced the game.

Jerome Bettis was a favorite of many Steelers fans and I continue to wear his #36 jersey proudly to this day. If his popularity in the city long after his retirement doesn’t speak to his impact then perhaps the fact every year in draft previews the Steelers are nearly always associated with a college back who is described as “Bettis-like.” There won’t be another Bus. Thanks for the ride, Mr. Bettis. You got us where we wanted to go and now with your journey complete, it seems you’ve finally gotten off at the last stop yourself.