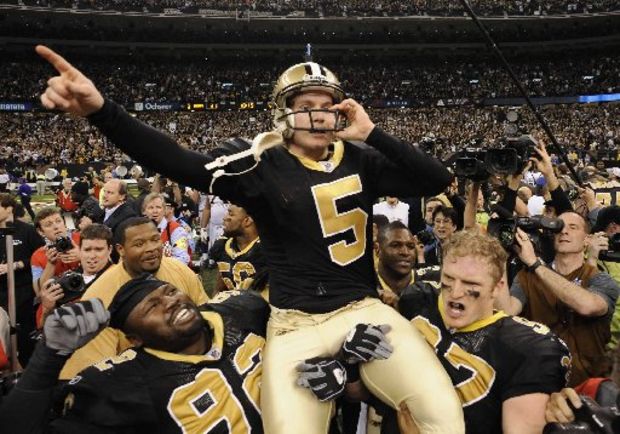 We’re not even a week in and I’m already sick of the preseason. Two posts into the preseason anad so far all we’ve talked about is kickers. I suppose it serves me right for blowing off the Hall of Fame game in order to watch the Pirates play the Dodgers on Sunday Night Baseball.

The Pittsburgh Steelers signed kicker Garrett Hartley after a three-way battle royal at Heinz Field on Tuesday. Hartley successfully bested NFL journeymen Jay Feely and Alex Henery in a kickoff I was told will be spoken of in hushed tones for years to come.

Hartley went 3/3 as an injury replacement for the Browns last year but was not invited back. Prior to that, Hartley spent 6 years in New Orleans where he may be the first kicker in history to get popped for using banned substances (a stimulant). A hip injury landed him on IR in 2011 and inconsistency plagued him the next two seasons leading the Saints to finally part ways with him towards the end of the year. Hartley did kick for the Saints’ 2009 Super Bowl winning team so he has that going for him.

In fact, all three of his field goals in the Super Bowl were over 40 yards making him the only kicker with such a distinction. Hartley seems to have a big leg – or maybe he’s been helped by being a dome kicker – as his career make percentage on field goals of 40-49 and 50+ yards is excellent. Although strangely he’s seldom been used on kickoffs, with either a punter kicking off or the Saints carrying a separate kickoff kicker. I’m not sure what the Steelers are gonna do there –Brad Wing can barely punt the ball down field so maybe he’d have more success kicking it off.

All I know for sure is Mike Tomlin would probably rather put a towel  boy on the active roster than carry two kickers.