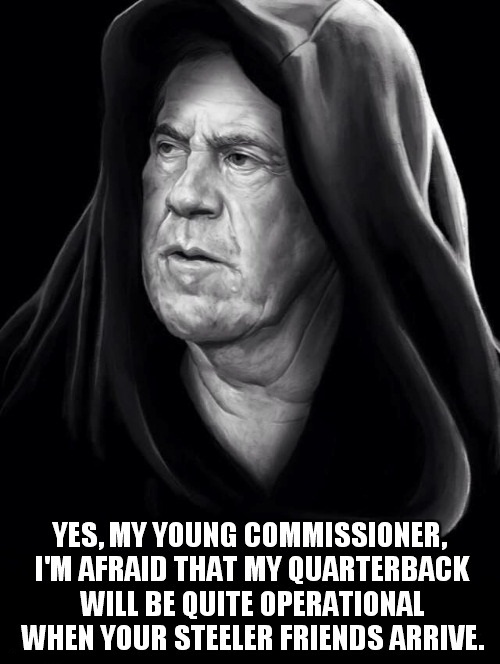 The Patriots have been undoubtedly the team of the Decade over the past 15 years. They’ve won four Super Bowls and only cheated in three of them. The fourth one they only cheated in the AFC Championship game to get there. Regardless, New England is the model NFL franchise, possessing an uncanny ability to constantly turn over their roster while continuing to win. It’s something the Steelers wish they could say they’ve done.

CB Darrelle Revis and DT Vince Wilfork are the latest key players the Patriots are looking to replace as they gear up for another run in what looks to be an improved and competitive AFC East. They also lost cornerback Brandon Browner so like us, their secondary is going to have a new look. Super Bowl hero Malcolm Butler steps in one side while former Eagle Bradley Fletcher was acquired to take over Revis Island. Whether these guys will be able to play to the level of last year’s secondary is a question which leaves open the possibility of this game turning into an epic shoot-out.

And really a shoot-out would be the Steelers best hope for victory. Ben Roethlisberger is coming off a career year and is looking for more. The only problem is he’ll be without two of his key weapons in Le’Veon Bell and Martavis Bryant. Still, Ben and Antonio Brown can put on a show at any time. Also, when you have a QB with Ben’s talent and the offensive genius of Todd Haley (YEAH, I SAID IT) sometimes an unheralded receiver can come out of nowhere to post a big game. So if we are to upset the defending champs, Darius Heyward-Bey or Markus Wheaton are gonna have to step up.

Not that New England is any slouch on offense either. Even with Brandon Lefell apparently injured, Brady has a vast array of weapons led by the best tight end in the game, Rob Gronkowski. Julian Edelman and Danny Amendola aren’t the flashiest receivers but they’re good pass-catchers and can make plays. Our old buddy LaGarrette Blunt has to sit a game for the pot incident costing us Bell but it’s not like the Patriots are a running team anyway. Brandon Bolden will get most of the carries in his absence.

What the Steelers look like on defense is anybody’s guess. Literally, since the team still hasn’t released an official depth chart. The team badly needs Cortez Allen to shake off last year’s debacle and go back to looking more like the guy who looked like a solid starter in 2013. Either underachiever Shamarko Thomas or Will Allen will line up next to Mike Mitchell at safety and neither particularly inspires confidence. The linebacking trio of Jarvis Jones, Ryan Shazier, and Bud Dupree represents a future the Steelers hope comes sooner rather than later. If one or two of them plays up to their pedigree, the defense will benefit enormously.

This’ll be the first time since 2003 that the Black and Gold take the field without Troy Polamalu and Ike Taylor. The Glory Days are over. Ben and Heath (with an honorable mention to James Harrison) are all that’s left of the nucleus that brought us rings five and six. If there’s to be a Stairway to Seven, the Steelers are going to have to climb with a new generation of players. The future starts tonight.