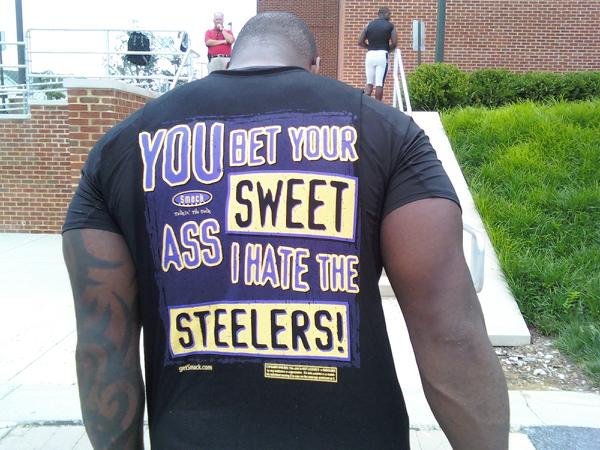 With the Pittsburgh Steelers idle after playing on Kickoff Thursday, the first Sunday of football season was a good chance to put on Red Zone, agonize over your fantasy team, and do a little scouting of our AFC North opponents. Last year, the once mighty North was a bastion of mediocrity. Record-wise it may have looked impressive in sending three teams to the playoffs with the Steelers taking the division crown with an 11-5  record but that was somewhat misleading. Four other AFC teams finished 9-7 and probably would’ve won ten or eleven games had they enjoyed the soft schedule gifted to the North.

This season, the North teams face significantly tougher slates. So, naturally, it’s not surprising three of the four teams are starting the year 0-1. The hapless Cleveland Browns were blown out by the Jets. Cleveland’s excuse is going to be they lost starting QB Josh McCown a quarter into the game, pressing a hungover (I assume) Johnny Manziel into action. Johnny Turnover helped the Jets’ cause with a pick and two fumbles, then likely helped the NYC economy by making it rain over at Diamond Dolls. I realize it’s hard to win when your quarterback can’t touch his nose with his finger but that doesn’t really excuse the Browns allowing 154 yards rushing or making journeyman Ryan Fitzpatrick look like a world beater.

Cleveland sucks. Of course, I fully expect them to beat us at least once this season.

Baltimore Ravens lost a tough game to the Denver Broncos where the only TDs came on pick-sixes. It was a struggle for both offenses as both teams played some extremely good defense. I should note, Peyton Manning suddenly looks really old. He’s moving gimpy and his throws look almost feeble to where I’m not sure if Father Time finally caught up with him. Joe Flacco is Joe Flacco – a good quarterback who plays capably when surrounded by good talent. Unfortunately (or fortunately, for us), the Ratbirds have a serious deficient in offensive talent with no Torrey Smith, no Dennis Pitta and no Ray Rice left on the roster. When the equally ancient Steve Smith is your current #1 receiver that’s a problem.

The positive was that their defense looked much improved over last year’s porous unit. At least, until they lost All-Pro linebacker Terrell Suggs to an ACL injury. Suggs isn’t what he used to be but he’s still a good linebacker and the emotional on-field leader of the team. It’ll be interesting to see if the team puts him on the short-term IR like they did when he tore his other ACL and was back by week 10 without somehow failing a drug test.

Cincinnati Bengals are the lone North team in the win column although their win came at the hands of the comical Oakland Raiders. Like the Browns, Oakland fans will use the excuse of losing QB David Carr early on forcing former Penn Stater Matt McGloin into action. Which would be a fair point except that their defense gave up 33 points while basically allowing the Bengals to move the ball at will. Cincy appears to have their best offensive teams in years – perhaps even better than those Palmer-Ocho-Houshyourdaddy teams of the early aughts – with AJ Green being complimented by an excellent running back in Jeremy Hill and the apparent emergence of the league’s next superstar TE Tyler Eifert. They have a pretty solid defense as well so if not for Andy Dalton‘s habit of choking in big games, one could easily make a case for Cincy being right there with New England and Denver as early favorites to win the AFC.

Of course, there’s a lot of football left to be played. The NFL season may only be 16 games but much can happen over that time. The North might not send three teams to the playoffs again this season but it wouldn’t surprise me if they did. The schedules might be tougher but it looks like the teams have gotten a lot better. Good news for their fans, bad news for the Steelers.