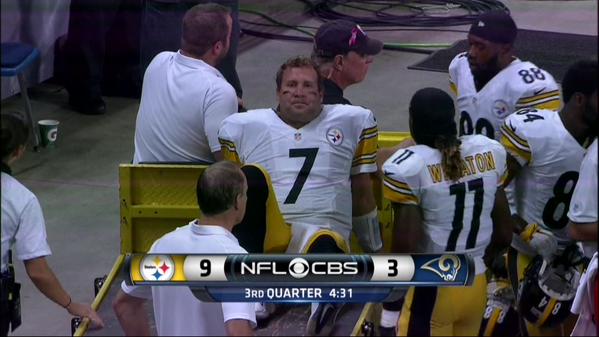 The Pittsburgh Steelers left Sunday with a 12-6 victory over the St. Louis Rams. As far as victories go, this was about as hollow as they get. Early in the third quarter, quarterback Ben Roethlisberger stepped up in the pocket only to get his knee bent in an way knees aren’t supposed to bend by a lunging Mark Barron. This sort of crawl-tackle was made illegal after Tom Brady was lost for a season because of it but of course no flag was thrown because only Tom Brady can’t be touched I guess.

Ben is usually stoic when dealing with one of his numerous injuries but the look on his face as he was carted off the sideline made it obvious he feared something really bad had happened. An MRI was supposedly scheduled for later today but the various “Insiders” are already reporting MRI results so I guess athletes jump the line or something. The preliminary diagnoses is sprained MCL which is obviously good news since hits like that often result in a torn ACL. If it is indeed a badly sprained MCL Ben will be out approximately4-6 weeks, with the safe bet being on the latter even factoring in Big Ben’s legendary toughness.

Oh, by the way, there was also a game yesterday. A defensive struggle of all things. And the Steelers won! I repeat, we won a low-scoring hard fought defensive struggle. That might be Sunday’s second biggest miracle.

Granted, the Rams are a sloppy disorganized bunch, at least on offense. QB Nick Foles defines mediocrity. Foles has the dubious distinction of throwing our secondary’s first pick of the season – a 4th quarter floater that Will Allen came down with to squelch a potential Rams rally. To be fair, he got little help from his receivers, who dropped several catchable balls that would’ve went for big gains, and a totally anemic running game.

Not that the Steelers high-powered offense fared much better. With Ben behind center, they moved the ball well on the first two drives but were stymied in the red zone on the opening effort and failed on Riverboat Mike’s 2 point-a-poolaza after a TD on the second leaving them with a 9-0 lead at halftime. The Rams defense, led by fired up Pittsburgh native Aaron Donald, did a good job all things considered. The return of Le’Veon Bell was supposed to be the big story but he was far more effective catching passes than running the ball. Our offensive line, particularly LT Kelvin Beachum, had a hard time all afternoon containing Donald and fellow DE Robert Quinn.

The Steelers have a pretty damn good defensive line of their own, however. DE Stephon Tuitt is quickly emerging as one of the year’s biggest surprises. He had 5 tackles including a sack and was a disruptive force all afternoon. The linebacking corps – minus Ryan Shazier, who watched from the sidelines with his arm in a sling(?!) – also did a nice job with Sean Spence filling in at ILB. Lawrence Timmons was all over the field while Arthur Moats had a very timely sack. None of our outside backers have distinguished themselves in the early going but it’s been balanced out by excellent work from the ILBs and strong work from the d-line.

With Ben down, the Steelers now turn over the keys to Michael Vick. Vick was 5/6 but there were scary moments with a near interception and a fumble the Steelers were able to recover. Vick hasn’t started regularly since 2013, when he got the Eagles off to a 2-4 start before giving way to – irony alert – Nick Foles. On a weekend when we saw Luke McCown (Saints), Jimmy Clausen (Bears), and Brandon Weeden (Cowboys) all start games, I suppose Vick isn’t the worst option to have. Hopefully he buckles down and learns the playbook, something he evidently couldn’t be bothered to do last year with the Jets.

Maybe just not this week, though. The Steelers have a short turnaround to Thursday night when they face their old nemesis Baltimore Ravens. The Ratbirds are off to an unprecedented 0-3 start which is terrible news for the Steelers as a wounded animal is usually the most dangerous. Of course, I don’t have to tell Michael Vick that.