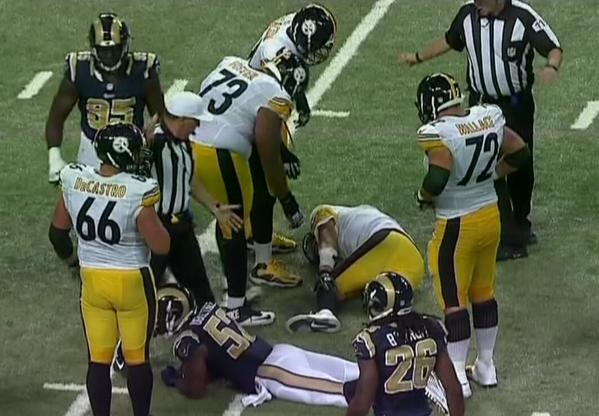 Pittsburgh Steelers quarterback Ben Roethlisberger spoke for the first time since sustaining that scary looking knee injury last Sunday against the Rams. In my recap, I mentioned the look on Ben’s face not being his usual poker face when suffering an injury. Turns out, there was reason for that. Ben told reporters when he initially got to the sideline he feared his leg was broken.

Which makes the fact he chose to limp off the field instead of taking the cart pretty damn crazy.

To clarify the medicals, Ben has a sprained (or partially torn) MCL with deep bone bruising. An MCL tear isn’t as serious as an ACL and could heal enough to play in a few weeks. The more serious problem is the bone bruise which Ben describes as the most painful injury he’s ever suffered. How long that pain lasts is harder to predict and it’s actually the injury that’ll keep him on the sidelines until it heals enough to play.

Ben also spoke about the controversy over Mark Barron‘s hit. It’s being reported that Barron is expected to be fined by the league despite the incompetent officials failing to throw a flag on the play. There’s no doubt he violated the so-called Tom Brady Rule which prohibits downed defenders from lunging at a QB’s knees. At the same time, Ben says he doesn’t feel the play was dirty and I’d have to agree with him.

As much as I hate losing Ben, I also am not a big fan of all the recent rule changes which make playing defense so difficult in this day and age. Defenseless receivers, launching, leading with the helmet, there’s so many rules now I’m not sure half the Steel Curtain could even play in the current NFL. Barron did wrong by crawling in an effort to tackle Ben’s legs but at the same time Ben did step up in the pocket directly towards him and it’s nature for a defensive player to react trying to make a play. It was an illegal move, yes, but I don’t think he was consciously trying to injure Ben.

Not that a fine or even a flag would’ve been any solace. 15 yards and a first down hardly makes up for 6 weeks of Ben Roethlisberger. Throughout his career, Ben has built a reputation as the toughest S.O.B. to ever step behind center. For the Steelers sake, let’s hope that legend gets another chapter added to it sooner rather than later.