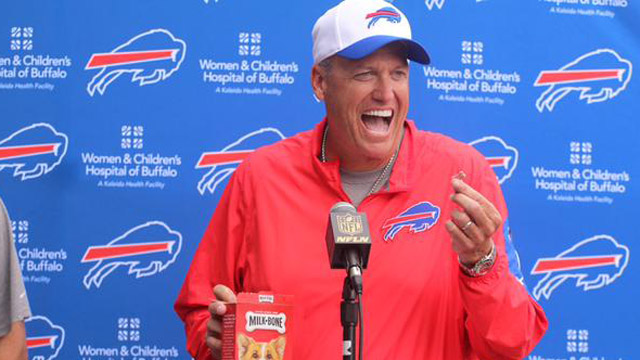 After weeks of discussing one scenario after the other, it comes down to this. The Pittsburgh Steelers playoff hopes rest with Rex Ryan and the Buffalo Bills. In the wake of their inexplicable bed shitting against the Ravens, the Black and Gold had two possible paths to the post-season. Either the Bills had to beat the New York Jets next week or the Denver Broncos had to lose out.

Things couldn’t have gone worse for us in week 16. First we lose to the Ratbirds in what has to be one of the most frustrating performances of the Mike Tomlin era. Then the Patriots win the coin toss in overtime against the Jets yet go against all conventional wisdom and decide to kick. Predictably, New York scores a walk off touchdown without Tom Brady ever touching the fully inflated ball. Bill Belichick couldn’t make it any more obvious he was throwing the game to keep the Steelers out of the playoffs if he tried.

Then on Monday night the Bengals held a commanding 14-3 at halftime. Things were looking good for us having two possible backdoors into the playoffs next weekend. Of course, Cincy went full Bungle and blew the lead, rallied to send the game into overtime, then lost in extra frames. Unlike the Patriots, at least they looked like they were trying to win the game.

The playoff scenario is simple – the Steelers need to beat the Browns and the Jets must lose to the Bills. Good news is Ryan’s team isn’t likely to lay down for anybody. Buffalo has nothing on the line but this is Rex’s first year and he’s facing the team that just fired him. He’ll definitely bring it on Sunday. The bad news is our playoff hopes rest with Rex Ryan and the Bills. They’re where they’re at for a reason.

Of course, the same could be said about the Steelers.