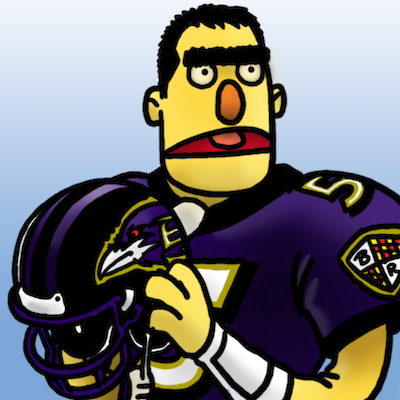 Ninety-two yards. Those three words will live in Steeler infamy alongside Tim McKyer, Joe Nedney and SpyGate. Ninety-two yards. How does the most vaunted defense in the NFL allow a team to drive almost the length of the field in less than two minutes with the game on the line?

Joe Flacco played the game of his life. I’ve been tough on Bert, deservedly so in most cases, but I have to give credit where credit is due. Playing with sub-par receivers and under constant siege, he remained calm, scrambling away from danger and making plays with an almost Roethlisbergian effectiveness. The Ratbirds won this game because of him and him alone.

I said in my preview the Steelers had to limit the damage done by Ray Rice although I didn’t expect they could totally eliminate him from the game. Well, they shocked me because they pretty much did. He had 43 yards rushing and 43 yards receiving which is about as ineffective as I’ve ever seen him. Lawrence Timmons (who played light years better back at his natural position) and Larry Foote deserve a lion’s share of the credit. Foote, in particular, had an outstanding game and I’m starting to believe James Farrior’s “injury” is actually a graceful way for the team to hand the starting ILB job to him.

While the line and linebackers did their job, the secondary was atrocious. Absolutely atrocious. Time after time the Ratbirds were stuck in third and long only for the defense to fail at getting off the field. Baltimore was 14 of 21 on third down conversions which was the Steelers’ worst showing in over forty years. There were some spectacular catches and there were a couple lame penalties (the pass interference call on Ike Taylor which gift-wrapped the Ratbirds’ first touchdown was ridiculous) but mostly it was Flacco moving, escaping and delivering the ball with ruthless efficiency.

The Steelers offense was too timid in the first half before coming alive in the second. Operating almost exclusively out of the no-huddle after halftime, Ben Roethlisberger drove the team down to the Ravens’ 14. It looked like the Black and Gold were going to take control of the game when he tried another of those goddamn stupid f#cking quick-outs which NEVER EVER WORK SO WHY DO YOU KEEP CALLING THEM and was picked off by Terrell Suggs. Suggs, it should be noted, did jack most of the game as Max Starks squashed him like a loudmouth grape.

The ensuing Ratbird TD drive (featuring the aforementioned horrible call on Ike) amounted to a 14 point swing. To Big Ben’s credit, he shrugged it off and led the Steelers on a TD drive of their own but that was the first of two mistakes which wound up biting them in the end. Once the Steelers opened things up, they actually moved the ball surprisingly easily on the Ravens’ defense. Jerricho Cotchery saw his first significant playing time and the Cotch Rocket was a pretty good poor man’s Hines Ward. Hines, by the way, got knocked the F out on a filthy dirty play by Ray Lewis (with no penalty called, ‘natch) on his first target of the evening, capping what is amounting to a miserable season for the rapidly fading star.

After the Steelers’ TD, James Harrison, who played like a man possessed, took matters into his own hands by strip-sacking Flacco. Ben then did what Ben does, scrambling away from danger and finding Antonio Brown in the end zone. Mike Wallace actually caught the TD as he came  out of nowhere to intercept the pass which looked intended for AB but all’s well that ends well.

Except, of course, things did not end well.

The final sequence of events featured some of the most godawful coaching I’ve seen in my thirty odd years of Steeler fandom. When people try arguing Mike Tomlin is better than Bill Cowher, it’s games like this that lead me to say they’re nuts. Sure you can blame the coordinators for inexplicable playcalling but doesn’t the final responsibility lie with the head coach?

The Steelers had a four point lead, the ball and a chance to run out the clock. Ben threw some passes, which is stupid when you’re trying to milk time but since Rashard Mendenhall is completely useless I can’t argue with it. Cotch Rocket caught a 14 yarder and then Redzone added a short 7 yard catch-and-run to set the Black and Gold up with a third and six from the 30. Common sense says you run the ball, kill time, and try to get Shaun Suisham a few yards closer for his field goal attempt. Instead, they throw a pass which falls incomplete, stopping the clock. Then they call a time out to (I guess) discuss whether they should trust Miss’em Suisham with a crucial 47 yarder. Somehow, they don’t get back on the field in time and are flagged with DELAY OF GAME COMING OUT OF A TIME-OUT. So now they’re forced to punt.

Baltimore gets the ball on their 8 after a nice boot by Jeremy Kapinos. All game Dick LeBeau has been blitzing Flacco because the book on him is he gets rattled under pressure. But in this situation, you’re just trying to prevent big gains and keep the clock running. Naturally, the Ravens complete a 21 yarder right out of the gate, then two more where the guy calmly walks out-of-bounds. Before you know it, Baltimore is down to the Steeler 26 WITHOUT HAVING TO USE THEIR SOLE REMAINING TIME-OUT. How does that happen?

Now, I’m not a defensive coordinator, and I’m for damn sure not a living legend like Dick LeBeau, but I’ve seen enough football to know when a team gets about 20-25 yards out with time dwindling, they take shots at the end zone. Drop guys back into coverage and play it safe. Instead, LeBeau keeps his standard D on the field, blitzing away, while asking his corners WHO HAVE BEEN GETTING KILLED ALL DAY to play man-to-man. Ike lets Torrey Smith run by him into the end zone but Butterfingers can’t hold on to a beautiful pass from Flacco. *Whew* Dodged that bullet, right? On the very next snap they run THE EXACT SAME PLAY except Will.i.am Gay is covering this time and he’s beat and Ryan Clark is too late getting over to help and AAARRRRRGGGHHH!

I’m sorry for the lateness of this recap but I haven’t been this angry and frustrated by a Steelers loss in a very long time. The Super Bowl was a valiant effort but we played a better team. Week one was just a complete failure. This was a game we had won, a game we should have won. And we just blew it. Absolutely blew it.