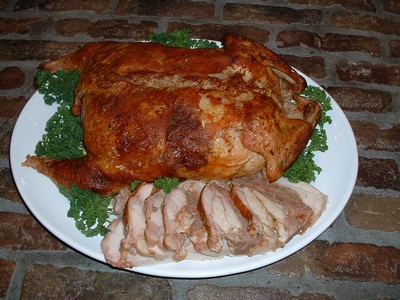 The good news is my computer finally seems to be up and running so I shouldn’t be MIA again this season. The bad news (well, it’s good for me) is I booked a last minute flight to Tampa so I could spend Turkey Day with my parents. Oh, I could stay here in Pittsburgh but between me and the couple thousand of you who read this blog faithfully every day, my aunt is a really lousy cook. A few Thanksgivings ago, she actually cooked the turkey with the giblets still inside.

Anyway, since I have to pack quickly so I can hurry up and wait (and wait and wait) in what promises to be an epic line at the airport, today’s update will have to be a quickie. Without further ado, here are ten Pittsburgh Steelers related-reasons I’m thankful this Thanksgiving.

1 ) Ben Roethlisberger‘s superhuman ability to absorb punishment. Every year he’s afflicted with a list of maladies which would cripple a lesser man. When you gather ’round the television on Thursday to watch the Detroit Lions (hopefully) put an end to the Green Bay Packers obnoxious undefeated streak, think about Matthew Stafford and how he’d fare here in Pittsburgh.

2 ) On a related note, let’s give thanks to Jenny Craig and/or Jared from Subway. Whichever one helped Max Starks drop the 60 pounds that allowed him to get back on the field. I know talking about diets on Thanksgiving is a little like starting a daycare at Penn State but I hope Mad Max doesn’t put away too much bird tomorrow. Since his return, the offensive line has improved dramatically.

3) Hines Ward not whining about being demoted to fifth string. Yet. Even the cheerleaders at the Post-Gazette are realizing his days with the Steelers are probably numbered. I’ve been hard on poor Hines this year but I really am a fan of his. I even watched that atrocious Dancing With The Stars program so I could vote for him. I hope Hines has the good sense to waltz off into the sunset with grace and dignity. I am old enough to remember Franco Harris getting traded to the Seahawks. Nobody wants to see Hines in Cardinals red, except maybe Ken Whisenhunt.

4) Dick LeBeau remaining forever young. My parents did what regular people do when they turn 62, retire and move to Florida. LeBeau is 74 and still going strong. The Steeler are currently ranked third in pass defense, sixth in run defense and second overall. Sure there have been a few hiccups along the way but would anybody trade this crazy old man for any other D-coordinator in the league?

5) Speaking of the D, let’s have a moment of appreciation for Troy Polamalu and his quiet excellence. Quiet in terms of letting his play speak for itself instead of constantly running his mouth like his damn fool defensive back-mate. Rod Woodson was the first real superstar I was able to follow as a Steeler fan and looking back I definitely didn’t appreciate him enough. Troy is going to be the standard by which Steelers will be measured for decades to come.

6) One talker I will give thanks for is Mike Tomlin and his seemingly endless supply of entertaining Tomlinisms. Sure he constantly lies to the media and I’m still not entirely convinced he’ll enjoy the same level of consistent excellence which marked the Bill Cowher regime but he’s definitely the most quotable coach I’ve ever seen. And quotable in a positive way, not in that annoying boastful arrogant way some coaches are (I’m looking at you Rex Ryan).

7) By the way, I’m thankful to Roger Goodell for fining Rex a cool $75,000 for dropping an F-bomb on a fan. You finally did something right, Ginger Dictator.

8 ) Good football games on Thanksgiving. For reasons I’m not entirely clear on, the Thanksgiving day games have always featured the Detroit Lions and the Dallas Cowboys. Well, the Lions have historically been miserable failures and I can’t stand the Cowboys so Turkey Day football was an utter dud. This year, Detroit against Green Bay promises to be an excellent match-up while the NFL Network will chip in with the Harbaugh Bowl between the 49ers and Ravens later in the evening.

9) One good thing that did come from those boring Thanksgiving day games was John Madden. Oh, Madden was a dopey commentator who remains bitter about the Immaculate Reception to this very day. But his love for turducken introduced my family to nature’s perfect Thanksgiving feast. It’s a chicken in a duck in a turkey!

10) And finally, I’m most thankful that I wasn’t born in Cleveland.

One Response to “Giving Thanks To The Black And Gold”