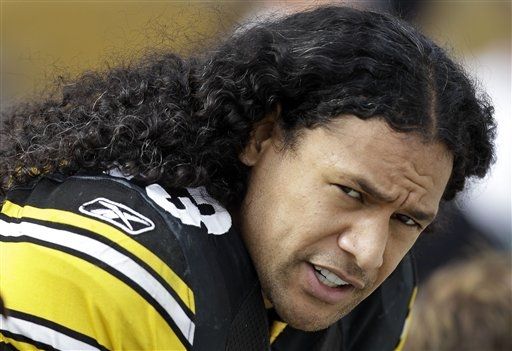 And people call it Pittsburgh Paranoia…

I usually turn off whatever horrible commentary team the networks have saddled us with and watch the game alongside the Pittsburgh Steelers radio crew of Bill Hillgrove, Tunch Ilkin and Craig Wolfley. Unfortunately, my flight was delayed getting back to the ‘Burgh so I was forced to listen to well-known Steeler-haters Cris Collinsworth and Al Michaels on Sunday. After the NFL’s answer to JLO, Michele Tafoya, gave an update on the condition of Troy Polamalu, Michaels threw a shot at the Steelers by sarcastically comparing their disclosure of information relating to injuries to the approach taken by the commies in “old East Germany.”

Now another noted Steeler-hater, Mike Florio at Profootballtalk, is jumping on the pile. Yesterday, he wrote a scathing piece in which he all but accused the Steelers of going all SuckerPunch on Troy and turning a blind eye as he becomes a vegetable. As usual with Florio, he doesn’t let little things like facts or common sense stand in the way of his Pittsburgh-bashing. In the very same article, he praises the Jets for their handling of Dustin Keller’s recent concussion.

You know, the one where Keller shuffled off the field like a lightweight stumbling out of the Bottle Shop, plopped down on the bench where he had trouble remembering the months of the year, then came back into the game a short while later.

Florio contrasts this to the Steelers usage of the term “concussion-like symptoms.” Quoth PFT:

Fortunately, the Steelers got wise during intermission, deciding to leave Polamalu in the locker room for the balance of the game.  Given their past handling of head injuries, that’s progress.

That “past handling” to which he refers is when the team used the term “concussion-like symptoms” to explain blows to the head suffered by Hines Ward and Troy in earlier games. Of course, what he neglects to mention is IN BOTH CASES, both players left the field immediately after sustaining the hits and did not return to the field again. But I guess in Florio’s world, the Jets allowing a clearly concussed player to risk brain damage by going back on the field is much more honorable simply because they admitted he had a concussion AFTER THE FACT. What a maroon.

I find it hilarious that Michaels, Florio, Bozo the Columnist and other entities are jumping on the “The Steelers are strangely secretive” bandwagon. It only took them about five seasons to figure out what I’ve been writing about for years. Mike Tomlin and his staff are sneaky duplicitous liars when it comes to dealing with the media. Unlike those entities, whose whiny little screeds reek of self-important “WAH! WAH! We’re the press! We deserve to be told the truth! WAH! WAH!” drivel, I hold no such sense of entitlement.

I’ve put “concussion-like symptoms” in snarky little quotes since the first time I heard the term come out of Tomlin’s mouth precisely because I knew it was their carefully worded excuse not to evaluate a player under the NFL’s rigid concussion protocols. As I’m neither a reporter nor a degenerate gambler, I don’t care what terminology Tomlin uses or whether he’s entirely forthcoming about the details. And making the leap from “they’re trying to skirt protocols” to “they’re sending guys out there to suffer brain damage” is ridiculous. I’m sure the Steelers take every precaution, as evidenced by the fact they’ve refused to allow players to return to games.

If the Steelers would rather treat their players under their rules, not under some arbitrary guidelines set up by the Ginger Dictator, that’s their prerogative. Although I do have to marvel at the stunning hypocrisy of people like Florio. San Diego Chargers offensive lineman Kris Dielman stumbled onto the wrong sideline yet the coaches left him in the game which led to him having a seizure on the team flight home and there’s nary a word of outrage or call for a league investigation. The Jets send an obviously concussed player out after failing the most basic of tests (or else Keller is a functional illiterate) and they’re lauded as a paragon of virtue. The Steelers, whose team doctor ESTABLISHED the baseline concussion tests adopted by the NFL, are subjected to venomous articles despite taking every conceivable precaution because they don’t tell the media what they feel entitled to know.

See, it’s not Paranoia when people really are out to get you…