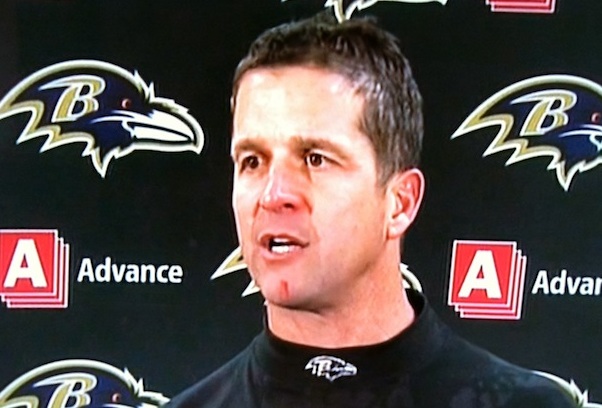 For weeks now, some of you may have noticed sarcastic references to “Gatorade showers” in my posts. For those not in on the joke, what I’m referring to is the Ratbirds dousing their coach with the foul-tasting sports drink after they swept the season series with the Steelers. I’ve watched football a long time and I’d be hard pressed to recall a more ridiculous post-game display. Teams that clinch their first playoff berth in decades shower their coach with Gatorade. Teams that just won the Lombardi Trophy shower their coach with Gatorade. Accomplishing the pedestrian feat of beating your division rival a whopping twice in a row does not merit such a spectacle.

Unless you’ve developed an inferiority complex about being the Steelers’ bitch, I guess.

Now, that wasn’t John’s doing although one can imagine Mike Tomlin‘s reaction if his players had done something similar. It’s a moot point because Tomlin has instilled in his men that winning titles is the only goal worthy of time and consideration. What I can blame John for is the photo you see above. No, he didn’t get cut when he told Ray Lewis he wasn’t starting last weekend. He busted his chin chest-bumping with Baltimore GM Ozzie Newsome. The two were whooping it up like a couple of giddy schoolgirls in the bowels of Heinz Field following the Ravens’ last second win.

Not to be outdone in the asshole department, we have John’s brother Jim. Jim, you may recall, is the man who turned the traditional post-game handshake into the Royal Rumble with his antics. The Niners had just put away the Detroit Lions when Jim and Detroit coach Jim Schwartz met at mid-field. Harbaugh, like his brother, was fist-pumping and generally acting the fool when he approached Schwartz. Schwartz wanted to have a word with him when Harbaugh either shoved (Schwartz’s version) or “back-slapped” (Harbaugh’s) him causing Schwartz to fly into a rage. Players and officials got between them before a hockey fight could break out but it made clear to everyone that Jim is a chip off the ‘ol Harbaugh block.

This isn’t the first time Jim’s antics have caused him to run afoul of opposing coaches. Back in 2009, USC coach Pete Carroll asked Harbaugh, “What’s your deal?” when they met at midfield following Stanford’s victory over USC. Already up more than three touchdowns, Harbaugh had his team throwing deep passes and even attempted a 2-point conversion. Granted, that sort of behavior is common in college but that crap doesn’t fly in the pros.

Then again, big brother John has exhibited similar dickish behavior against the Steelers and he’s never coached in college. In the season opener, he dialed up a fake kick/2-point conversion when an extra point would have sufficiently put the Ravens ahead by three scores. Then, late in the fourth quarter when the game was clearly over, he had Joe Flacco throwing bombs in to the end zone in an obvious effort to run it up.

Credit where it’s due, the Harbaughs are definitely successful. But their success is entirely without class. Hopefully, the Steelers take care of business on Monday so we don’t have to wait and see if the younger Harbaugh will show a little more sportsmanship than his brother. If I were a betting man, I wouldn’t lay odds on it.

One Response to “Which Harbaugh Brother Is A Bigger Dick?”