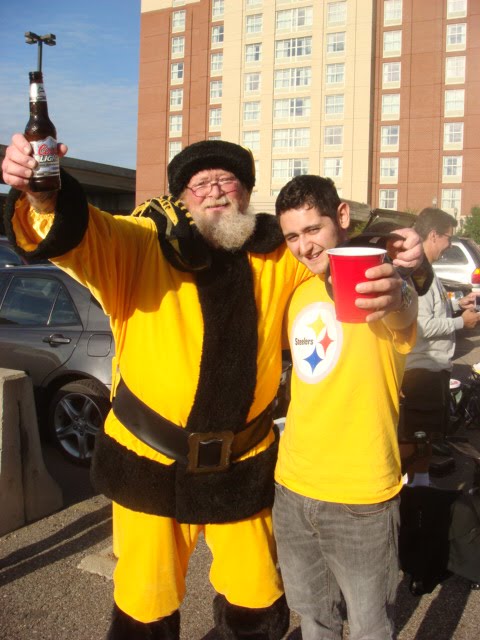 (Editor's Note: Not Hennessy. That really is Santa, tho.)

Christmas will soon be here! The time of year for cheer, happiness, good will towards men…

The time of year when you swim through hordes of over-perfumed or hygiene unfriendly shoppers to spend money on overpriced junk. Let’s not forget my favorite part of the Holiday season, the AIRING OF GRIEVANCES!!

Am I the only one who fumbled my cheer and recovered a pigskin of disappointment?

Last year, my fiancé spent hours locating and framing two poster-sized pictures for me. Be jealous. One print is of the USX Tower under construction in 1968, with my late grandfather-father almost visible as a foreman forging a symbol of the Steel City. The other is of Mike Tomlin, donning Black and Gold gortex as he guides our Pittsburgh Steelers through a playoff win en-route to a Lombardi Trophy in 2008.  My friends “watch” the Steelers with me whenever they have a national game.

Anyway, allow me to air my grievances….

What the hell was Tomlin thinking putting Ben Roethlisberger in for more than fifteen minutes of “60 Minute Steeler Football!?” I figured the game plan was to start Ben due to the lack of a reliable back-up, build a ten/thirteen point lead, and hand the keys over to the defense to bring us home. Great coaching. Great plan.

It started out well. Big Ben imposed his peg-legged will on the Niners, marching down the field just as he did to win the aforementioned ’08 Lombardi. Then, INTERCEPTION IN THE RED ZONE!!

Like Chris, I waivered back and forth about whether Ben should spend Monday night watching the game from his couch with James “Lights Out” Harrison. I realize the resilience, toughness and leadership of #7 cannot be matched. I realize that Mike Tomlin walked into a championship team and kept the ship steered straight ahead. But when does he realize there is more to being a blue-collar leader than letting your field general stand in a firing line to prove his manliness? If I want to pass by that picture of MT and never be tempted to utter a naughty word toward the visage of OUR coach commanding officer, he better take care of his men.

Let me take you to Tomlin’s press conference, which I so eagerly listen to every Tuesday for the –ism’s we have all come to love:

Reporter: “Ben lobbied hard to stay in until the bitter end, was your inclination to take him out at all?”

Coach: “No.” (then unenthusiastic blabber about competitor, leader, and such)

Reporter: “Was there a point, Mike, where you considered pulling him?”

Coach: “No, not really.” (then unenthusiastic blabber about competitor, leader, and such)

Iron forging requires a strike when the metal is hot. The Ravens fired up the blast furnace when they crapped the bed on Sunday night. We had an opportunity to seal (not sell) a few more chances for the diehard natives to watch the playoffs from a yellow plastic seat in Heinz Field. That would have been great. Every member of Steeler Nation relishes our glorious past, but Tomlin needs to keep his focus firmly on the future.

Coach: “I’m not going to deny [Ben] of any of those opportunities”

That’s a total of -21 Tomlinism Points. When you score less than Vince Young did on the Wonderlic, you’re in trouble. Add 1 for San Francisco’s continuing MNF dominance, for final score of -20. Exactly how many points the Niners had on the board after pushing our boy just a little too far. I still love ya, Mike, but don’t let it happen again.

Special Thought and Insight on this one courtesy of and thanks to William Hickey. Merry Christmas, Pap.