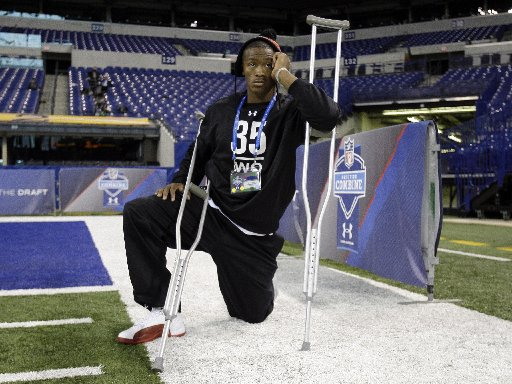 Our job at TotalSteelers is to keep you, dear readers, entertained and informed on all things Pittsburgh Steelers.  Just like cliff notes in high school, our black and gold cover cuts through all the pointless information and distills things down to the essentials. It is for these reasons and these reasons alone that I will bring you up to speed on the action packed meat market that took place this past weekend.

Nothing. Nothing happened. As seen above, hoards of people gathered to witness the excitement and, next to a Colts home game, it was the least entertaining thing to happen all year inside Lucas Oil Stadium. What can you expect from a 250 man group physical exam?

“The combine gives us scouts an insight into the athleticism and physical commitment of the athletes!” said one pro-scout. “I get to look all official and stuff whilst observing athletic measurement at its finest!” said another.

In good faith, I will act like these good scouts and give you a quick breakdown of our 2012 draft, as told by the useless stats and performance metrics brought about by this charade. The NFL network was desperate enough to send out a camera crew for 24 HOUR COVERAGE, so I will humor them by telling you two things showcased by their efforts.

Who expected to see Baylor wunderkind Robert Griffin III (I refuse to ever reference his nickname RG3) blow it and run a nine second 40 yard dash? Nobody. The #2 prospect bested all the other QBs with a blazing 4.41, trailing the QB record of 4.35 by 2006 prospect Reggie McNeal. Many people thought Griffin was fast, and, stop the presses, he ran FAST!

Why it doesn’t matter:

Reggie McNeal went on to become a poor-man’s Kordell Stewart in Cincinnati, before he boarded the coach to Canada like an old man in search of discounted prescriptions. On the contrary, Big Ben‘s blazing five second forty didn’t prohibit him from becoming a two-time Super Bowl champion. I refuse to believe you can identify champions by arguing over 3/10ths of a second, between 50 athletes, on one given day. However…

This guy ran an unofficial 4.43 40 yard dash as a D-Lineman! Although I shun the value of such a statistic, he is a LINEMAN! All chasing a cheeseburger jokes aside, running 2/10ths of a second faster than Mr. Robert Griffin the third is an achievement. Oh, and did I mention he is a DEFENSIVE LINEMAN!? Watching this guy drop in coverage would be intense. OLB and Safety in one set of pads anyone? 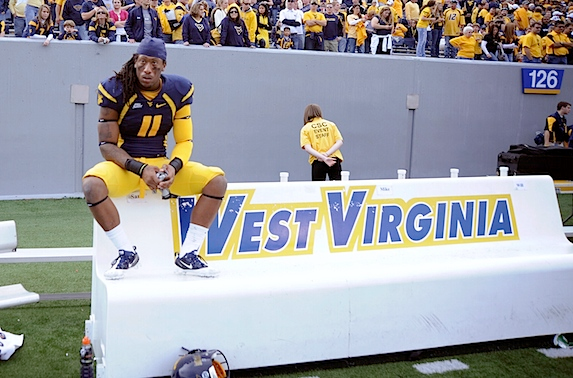 “I know you said he just ran by captain, but I’ve seen no signs of a one-sleeved man”

They do not speak on behalf of an athlete’s commitment to his sport. Or his “will to put in the time at the gym” as I heard from one too many NFL Network columnist. The idea is this – A bar has 225 pounds, you pick it up, you push it in the air and let it back down as many times as you can, you stand up, people applaud.

Why it doesn’t matter:

Okay, strength matters. James Harrison can swim underneath offensive lines because the force of his arms and one thigh could have taken down the Civic Arena two months ago (Civic, not Mellon – Corporate Terrorists). In a physical game like football, the more you can lift, pull, push and throw around is a good thing. It’s hard to have football strength if you’ve never seen the underside of a spotter’s package while lifting. With that in mind…

Bruce “The Quickness” Irvin benched 225 pounds just 22 times, besting only five of over forty DL prospects. This was not impressive. But did anyone see his 40 YARD DASH!?  Oh, and he looks like a Videogame Character from Tekken 5 brought to life – DRAFT HIM NOW!

Tune in tonight for more action-packed running, jumping, lifting and stuff. But if you have more important things to do than hanging onto threads of live action during the off-season, we completely understand.