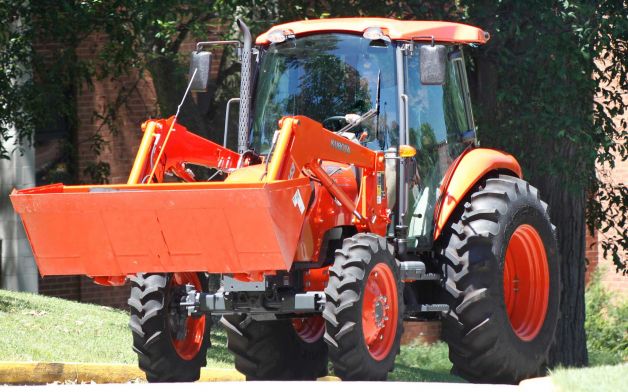 And then some players rolled into St. Vincent’s driving a bright orange Kubota tractor. Although you can’t really see him in that shot, Pittsburgh Steelers defensive end Brett Keisel is behind the wheel of that bad boy. If that’s not awesome enough, he was carrying his bags in the shovel.

The Diesel keeps alive a grand Black and Gold tradition of at least one player arriving to Latrobe in a noteworthy vehicle. Joey Porter once made his entrance in a pimped out golf cart, a few vets coordinated arriving in a fleet of classic vehicles back in 2006, and then last season we had James Harrison showing up in a tiny German clown car, er, smart car. There was at least one Eco-conscious Steeler again this year as Keenan Lewis arrived in his own electric car. It must be some sort of promotional deal because I can’t fathom anybody buying one voluntarily.

Anyway, the Steelers 2012 training camp kicked off yesterday with the annual “Welcome Back” conditioning run. This is another storied aspect of camp lore. OT Jamain Stephens’ morbid obesity caused him to collapse in mid-run leading a disgusted Bill Cowher to release the 1996 first rounder two hours later. Mike Tomlin introduced himself to the Steelers in 2007 by making an out of shape Casey Hampton sit by himself on the sidelines until he could complete the run without passing out. Who could forget the sad sight of Big Snack, jiggly man-boobs flopping all about, running up and down the rolling hills of St. Vincent’s all by himself, the closing theme from the Incredible Hulk playing in the background.

Hampton didn’t have to participate in the run this year as he’s currently on the Physically Unable to Perform (PUP) list after having off-season ACL surgery. Five other Steelers join him on the PUP list including Rashard Mendenhall and Max Starks, both of whom are also recovering from torn ACLs. Does this team need to lay off the leg press or something? Jason Worilds (wrist surgery) and James Harrison (undisclosed leg problem) also begin camp on the PUP.

And then we have the guy who didn’t participate in the run because he’s not in Latrobe: Mike Wallace. Yes, Wallace followed through on his threat to hold out of camp unless he’s given a brand new contract. He’s the first player to hold out since Hines Ward‘s brief hold out back in 2005. That one came to an end when Cowher called Ward and told him, “If you want to get a new deal done, better get your ass to camp.”

What Tomlin has told Wallace, we do not know. He did tell the media that Wallace needs to understand that “this thing,” ie the Steelers, are bigger than any one person. He also added that it was “unfortunate” for Wallace that he didn’t show up. The Steelers had a different reaction. A reaction which can best be characterized by the letters F and U.

The Steelers, you see, don’t respond well to threats. They’ve traditionally refused to negotiate with a player who’s holding out and accordingly they’ve “broken off talks” with Wallace as long as he chooses to pursue his selfish course of action. It appears they won’t talk to him until he shows his weasel face at camp which is an interesting Catch-22 because he can’t report to camp until he signs his damn tender. At this point it’s a literal stalemate with neither side seemingly willing to blink first.

Oh well, at least we had a nice quiet off-season…