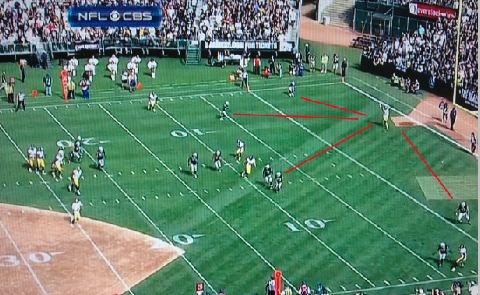 With less than four minutes left in yesterday’s game between the Pittsburgh Steelers and Oakland Raiders, Mike Tomlin elected to go for it on 4th down. The ball was on our 30 yard line, failing to convert would’ve almost certainly handed the Raiders the go-ahead field goal while we burned our last two time outs so we could get the ball back with somewhere around two or two and half minutes left. And that’s the best case scenario. So why would Tomlin take such a risky gamble?

This is what Stiller Football has become in 2012. The Steel Curtain is made of tissue paper. Blitzburgh has been replaced by Snoozeburgh (as in, quarterbacks can now take a nap in the pocket without fear of being disturbed). The “old, slow and done” guys are all gone so DO NOT blame this on age. High draft picks abound on this defense and not a damn one of them is any good.

Larry Foote and Ryan Clark are the only two guys who earned the right to leave Oakland with their heads held high. As much as I find his personality irritating, I have to admit Clark has established himself as the team’s third best defensive player after Harrison and Polamalu. For the second game in a row he made an early impact, intercepting Carson Palmer’s first pass of the afternoon to set up the Steelers first TD. Foote had 7 tackles and really stepped up in terms of run defense after Darren McFadden ran by half the team for a 64 yard TD.

The rest of the team? Ryan Mundy is an absolute embarrassment. Commentator Dan Fouts claimed the Steelers coaches considered Mundy “a fifth starter” in the secondary which, if true, means those coaches are absolute idiots. He can’t cover anybody and instead of tackling, all he does is run around trying to behead people. Mundy knocked Oakland WR Darrius Heyward-Bey out of the game on a scary helmet-to-helmet collision in the end zone which, while unintentional, should net him a hefty fine. I’m actually hoping the Ginger Dictator suspends him so I don’t see him on the field any more.

Mundy might be the highest profile stiff but he’s far from the only one. Lawrence Timmons made exactly one play all afternoon. That’s $55 million well spent. He was one of the guys along with Keenan Lewis who got wiped out on McFadden’s long TD run, by the way. Speaking of which, why is Lewis still starting? If the real refs ever come backs, he’ll get flagged on every play because unless he’s jumping on receivers’ back, they’re wide open. Not that fellow rookie Cortez Allen has been any great shakes either.

Of course, the secondary has long been a Steelers weakness. What covered for them was the fact they were good at pressuring the quarterback. Guess what? NOBODY IS PRESSURING THE QUARTERBACK. First rounders Ziggy Hood and Cam Heyward barely show up on the stat sheet. Big Snack can’t move any more. How about our other highly paid LB, LaMarr Woodley? He had an early sack then disappeared the rest of the game. He should give half his pay to Deebo because it’s obvious at this point that Harrison made him by drawing all those double teams. Chris Carter and second rounder Jason Worilds are useless. The only way Worilds will ever sniff a quarterback is if Tom Brady sends him a pair of his used Uggs.

Get well soon, James and Troy. Our defense is absolute garbage without you.

The only reason the Steelers managed to hold on to a lead until the very end was the Raiders seemingly tried to prove they could play even less defense than we did. Take nothing away from Ben Roethlisberger, who was once again magnificent. Ben had one of the great passing performances in recent memory, completing 36/49 for 384 yards and 4 TDs. Todd Haley has finally realized he has to put the ball in the hands of his best players because the team came out throwing and kept on chucking all afternoon. They mixed in a running play here and there but, as usual, the running game was a complete waste of time.

Heath Miller caught 8 passes, including two of Ben’s four touchdowns. Mike Wallace also caught 8 balls, piling up 123 yards and a touchdown. That TD, shown above, was a crazy play where Wallace did everything short of send up a signal flare to show he was wide open. Ben scrambled away from danger while the man covering Wallace cramped up and fell down, leading to him being about as wide open as you’ll ever see. Antonio Brown chipped in with 7 catches for 87 yards but had two fumbles, one of which he got back but the other was extremely costly.

Besides the putrid D, the Steelers biggest downfall on Sunday was all the mistakes. They dominated the first half but came away with only a three point lead because of penalties and turnovers. Besides McFadden’s long TD run, the Raiders other TD was set up by a Jon Dwyer fumble. The offense blew through time outs in the 1st quarter so they had none left when they were driving at the end of the half and had to settle for a FG. Brown’s second fumble set up the game-tying FG. Then we have special teams, where AB had two big kick returns (one for a TD) called back because of penalty. Meanwhile, Mike Goodson’s 51 yard punt return directly led to another of Oakland’s touchdowns.

Maybe Tomlin shouldn’t have forced Al Everest out so he could hire his buddy, eh?

Of course, Tomlin has much bigger worries on his plate. The Steelers are 1-2 and haven’t really played anybody decent yet. Scarier yet, the defense is an absolute mess and their only hope for salvation lies in a 32 year old guy with a bum back and knee and an All-Pro safety who plays like a kamikaze and has the career expectancy of one. The good news is we get a bye week where we can hopefully get some players back. The bad news is it’s a long season after that. A long season which will get even longer if some things don’t start to improve.

2 Responses to “Week 3 Recap: Back To The Drawing Board”