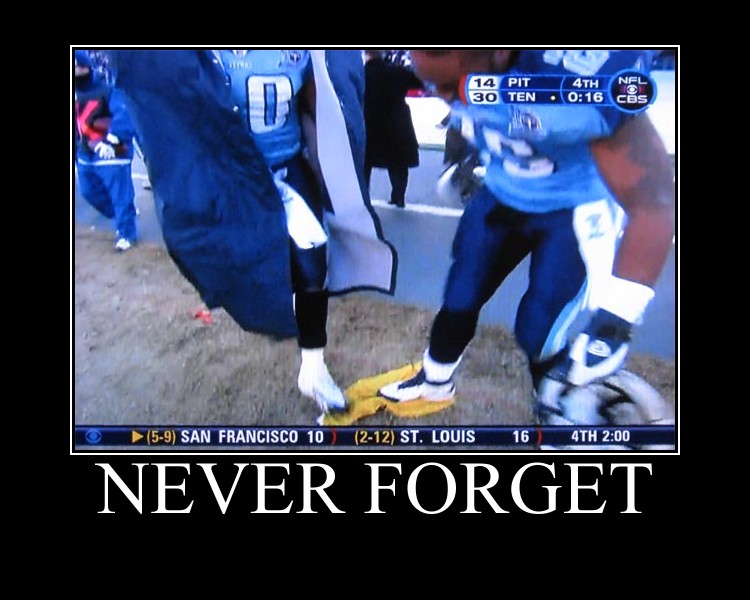 Short week this week as the Pittsburgh Steelers head down south to face the Tennessee Titans on Thursday Night Football. For once the Steelers’ schedule actually breaks in their favor. Short week games are never fun but at least they’re matched up against a bad team that’s reeling from two straight losses. And then you get a nice ten day break before facing the Cincinnati Bengals in the first real make-or-break game of the season.

The Steelers haven’t had the best luck on the NFL Network. They’ve faced the Browns on Thursday night two years in a row, first suffering a shocking loss then seeing Ben Roethlisberger suffer a season-altering injury. The Steelers aren’t a lock against bad teams, either. The Raiders suck yet we still lost to them a few weeks ago.

Of course, every situation is different. The Browns act like playing the Steelers is their Super Bowl so no matter the records or talent level, they always play tough. And as I recounted in my preview, Oakland has always been a house of horrors for the Black and Gold. Tennessee? Well, there was the Lendale White/Terrible Towel incident back in 2008 but the Steelers have beaten the crap out of them both times they’ve met since then.

One step forward, two steps back. James Harrison stepped forward last weekend, Troy Polamalu  and LaMarr Woodley stepped back. All the way back to the trainers room. With the short week and the prospect of getting extra rest in advance of the Bengals game, neither Woodley nor Polamalu are going to play. In Mike Tomlin‘s weekly lie-fest/press conference, he said Woodley’s injury is less severe than Troy’s, describing his hamstring strain as “mild.”

Which of course in Tomlinspeak probably means he tore it from the bone.

In the meantime, let’s hope Lawrence Timmons can give us a repeat of his dominating performance against the Eagles. I’m not a Jaworski who watches 285 hours of tape but from what I’ve heard, Timmons looked good because instead of assigning him set responsibilities (which he always abandons anyway), Dick LeBeau let him rove all over the field ala Troy. Timmons is a great athlete and it appears he has a good nose for the ball so perhaps they’ll turn him loose from here on out. Clearly asking him to be a disciplined play-the-system LB ala James Farrior was not working.

The Titans offense has been plain awful this year. The biggest culprit being former star RB Chris Johnson. The Steelers famously snapped his streak of 12 straight 100 yard games back in 2010 and in many ways he’s never been the same. He would have a Pro Bowl year that year but he held out the next and after getting his big contract has never approached his previous level. This year he’s rushed for only 200 yards in 5 games and hasn’t scored a single TD.

The Titans placed a lot of faith in first round pick (8th overall) QB Jake Locker expecting he’d make some leaps in his second year. Locker separated his shoulder a couple weeks back so our old buddy Matt Hasselbeck will start in his place. Hasselbeck was a capable game manager for the Seahawks team we beat in Super Bowl XL and did manage to lead the Titans to a 9-7 record last season. Of course, they played in a terrible division with Jacksonville trying exile themselves out to LA and the Colts who were busy Sucking For Luck. Hasselbeck is a wily vet but he’s at the point in his career where he needs help and when your best receiver is another old friend, ex-Steeler Nate Washington, that’s not enough.

Big Ben needs 300 yards to pass Terry Bradshaw as the Steelers all-time career passing leader. Unfortunately, I don’t think TB will be sending Ben any congratulatory notes in the mail when he does. Their relationship is still reportedly icy and I don’t expect it to thaw any time soon. It’s hard to compare eras so I’m not going to get into any “Who’s the better QB” debate except to say I hope some day these two guys are able to make peace with each other.

Big Ben should have a good shot at the record against a piss poor Titans D currently ranked in the bottom 5 in both rush and pass D. The Steelers scored one offensive TD against Philly and if they don’t do much better this week it’ll be a massive disappointment. Christian F’n Ponder dropped 30 on them last Sunday. Two time Super Bowl Champ Ben Roethlisberger and his Young Money receivers had damn well better do the same.

It’ll help if the receivers actually catch the ball this week. So many plays were left on the field against Philly. Mike Wallace in particular needs to step it up after his stellar 2 catch effort. Instead of begging for flags every time he’s jostled aggressively, how about trying to get open? Even Antonio Brown, who was the best offensive player not named Rashard Mendenhall, had a costly drop that would’ve went for 6.

Speaking of Rashard, his return was about as effective a comeback as you could’ve hoped for. The final numbers weren’t spectacular but 5.8 YPC was a nice change from what we’ve seen. Plus he probably would’ve had close to a 100 yards if not for the 15 holding penalties against Willie Colon. I’d like to see them clean that up this week, especially against a fairly lousy run defense.

The Steelers are 2-2 on the season. 2-0 at home, 0-2 on the road. The chances of that trend continuing all year are slim. At some point the Black and Gold will have to venture into enemy territory and come away with a win. Considering some expect Music City to look a lot like the Steel City come kickoff time, this is a good time to pick up a road win. And if they can get their offense in gear while fixing the penalty situation in the process, all the better.