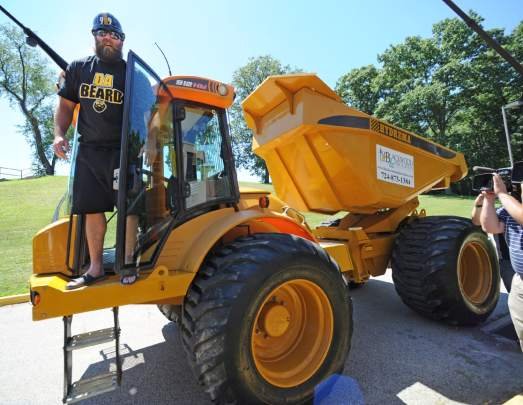 The Pittsburgh Steelers arrived in Latrobe on Friday, officially kicking off training camp with their annual Welcome Back “conditioning test” aka long-ass run. I’m happy to report there were no stragglers this season, sparing us the ignominious sight of a lone out-of-shape fatso struggling to jiggle their enormous mass across the rolling hills of St. Vincent’s College (I’m looking at you, Casey Hampton). Even offensive lineman Mike Adams completed the test, an impressive feat considering he’s only two months removed from being stabbed in the gut.

Heading into day four this afternoon, training camp has been a blissfully low key affair thus far. Whereas previous seasons have seen us worrying about hold outs and PUP (Physically Unable to Perform) lists, this year sees the Steelers present, accounted for, and relatively healthy. Four players sit on the PUP, only one of which (Heath Miller) is a player of consequence. The only real medical concern thus far is the condition of Ben Roethlisberger‘s knee, which was scoped during OTAs and is reportedly still giving him “a little discomfort.”

Absent any real drama, the most newsworthy occurrence from the first few days of camp was the continuing tradition of players turning their Friday arrival into an auto show. While Antonio Brown flashed the spoils of being grossly overpaid by rolling up in a slick new Rolls-Royce, the day was once again won by Brett Keisel. Last year, Keisel turned heads by riding in on a Bengals orange front-loader tractor. This year, he decided to pay homage to a team that is – as he calls it – “under construction” by arriving in a freakin’ dump truck.

Well, his nickname’s isn’t “The Diesel” for nothing.