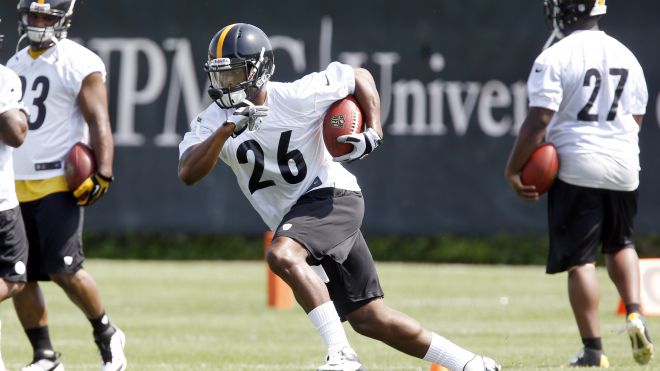 The battle to be named featured running back for the Pittsburgh Steelers was set to be one of the more heated competitions of this year’s training camp. The smart money figured it to be a two horse race between rookie Le’Veon Bell and fourth year man Jonathan Dwyer. Naturally, the team threw us all a curve during Saturday’s preseason opener when diminutive scatback LaRod Stephens-Howling got the bulk of the carries. What was going on?

Prior to the game, the Steelers released a preliminary depth chart which had last year’s starter Isaac Redman and Dwyer listed as co-starters. Bell was third. I assumed this was a respect thing with the returning vets being ranked on top as a message that all rookies have to earn their spot. Redman did get the first two carries of the preseason although LSH quickly replaced him. Dwyer didn’t join the action until late in the half with all the second stringers. Bell was experiencing knee soreness and did not play.

Coming out of the game, it appeared LSH was being looked at as a featured back which is patently absurd. The Cardinals signed Rashard Mendenhall to be their starter precisely because they weren’t happy with what LSH had given them in the role. Meanwhile, the local media wrote obnoxiously fawning stories about how Dwyer had slimmed down during the off-season and was determined to prove himself as a starter. The fact he didn’t get a single first team snap seemed to indicate the Steelers didn’t share their enthusiasm.

Dwyer is either practicing poorly or pissed off someone mighty fierce because the Black and Gold have released an updated depth chart with Redman still listed as starter but with Bell being elevated to co-starter. Dwyer has tumbled down to the third spot. It’s not terribly surprising to see Redman still in the starting mix – the Steelers like his effort and hard-nosed running style even if he’s proven time and again to be an extremely limited back. Redzone is fine for short yardage but he’s not a consistent chain mover and he’s not going to break off any big gainers.

Bell’s ascent is surprising only because he has yet to take a single snap during game action. I know the coaches are high on him and he’s been one of camp’s most buzzed about players. Given that, nobody would be shocked if Bell emerged as a the team’s featured back despite being a rookie. I just assumed they’d want to see how he actually performs on the field before bestowing the job upon him.

But it appears their minds have already been made up. The job is now Bell’s to lose. If he should falter, the next man up would be Redzone Redman. Meanwhile, Dwyer, for whatever reason, is an afterthought. Not to mention things look bleak for poor Baron Batch.

So much for a heated competition…