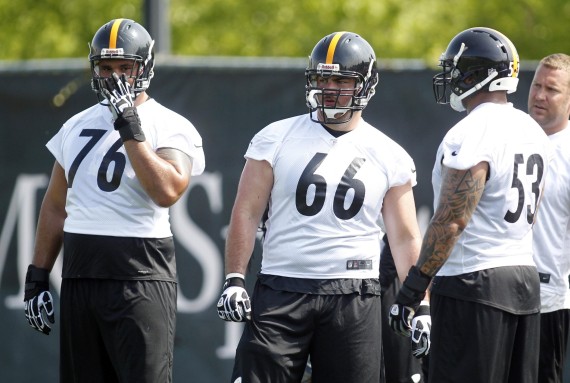 Anyway, what pearls of wisdom did Big Ben have for his young line?

I can appreciate the tough part. I can even understand the nasty part. But get penalties because they show you’re trying really hard? Choke someone out if you have to?

Is it me or is he basically telling the guys to be more like Willie Colon?

We got rid of Colon because he was an out of control psychopath who did more harm than good. He was certainly a talented run blocker, there’s no question about that. However, whatever he brought to the run game couldn’t be off-set by his innumerable false starts and personal fouls. That’s the entire reason the Steelers got rid of him!

Look, I realize Ben is frustrated. I also realize he’s always been very protective of his O-line because their job is to be protective of him. But shouldn’t the coaches be telling these guys how they’re expected play?

“I know the O-line coach [Jack Bicknell Jr.] probably didn’t want to hear me say that, but I just want them to have the confidence to go out and play the way that I know they can.”

Here’s a thought: Instead of worrying about whether your line plays with a nasty enough demeanor of if your young running back is a lazy goldbricker, how’s about concentrating on your own level of play? After all, the backs can run and the line can block and none of that will matter if you TURN THE FRICKIN’ BALL OVER FOUR TIMES. So how about that, $100 Million Dollar Man?